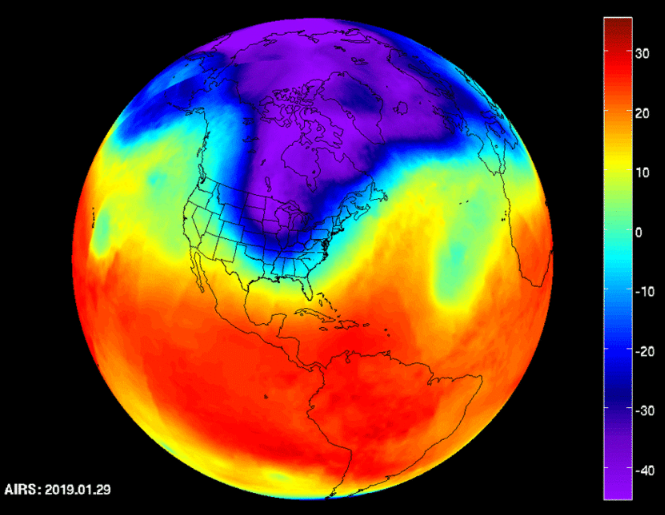 Insane weather in the northern latitudes. The geographies of the most vulnerable – marginal locations in the centres, population dynamics, socio-economic issues – have led to severe problems. What’s going on?

In your geography class, you will likely have learned about ‘global winds’ … the easterlies, trade winds, and so on. You will also have learned about the cold polar winds. What your textbook probably has not told you is that sometimes the polar cold winds can ‘descend’ into lower latitudes and cause havoc. (The polar winds are at a high latitude.)

A polar vortex (plural: vortices) “is a persistent, large-scale, low-pressure zone less than 1,000 kilometers (620 miles) in diameter, that rotates counter-clockwise at the North Pole (called a cyclone) and clockwise at the South Pole, i.e., both polar vortices rotate eastward around the poles. As with other cyclones, their rotation is driven by the Coriolis effect. The bases of the two polar vortices are located in the middle and upper troposphere and extend into the stratosphere. Beneath that lies a large mass of cold, dense Arctic air.” (Source: https://goo.gl/M6qG6w)

“Under the vortex, a large mass of dense, cold, dry polar air lies. In the latitudes lower than this, there is warmer, moist air. Where these two meet, it can get fierce. The vortex’s strength varies year to year. When it becomes very weak, the cold air moves towards the Equator.”

If you are in the path of that cold air mass, you are in for some serious trouble.

This is what happened in late January – early February, hitting northern latitudes with heavy snow, and dangerously low temperatures that even led to some deaths!

Particularly hard-hit were the US mid-west (look at a map of the states that are considered part of the mid-western USA ) and northeast (look at this map).

Map of the states comprising the “midwest” USA. [Source: https://goo.gl/ffhGl7 Accessed: 3 Feb. 2019] Click on the image to view a larger version.

First check out this very interesting and easy-to-understand site to learn the fundamentals of polar vortices:

Then, you can check out what happened in the recent cold spell with this animation from NASA.  You will need to apply your map-reading skills (this may be a little easier for ICSE and CBSE students because they will likely have learned map-reading). Look at the relationships between latitude and weather. You will also apply the legend on the map to see the variations in temperature as the vortex moves southward. Observe that the legend is color-coded to show different temperatures – this uses what is called a ‘color ramp’: from one end of the scale to the other, the color progresses to show values. (I have given you a still image here, but the animation is brilliant!)

The US news media, especially the online versions, have been very effective in communicating information about the phenomenon to people. There have been many videos explaining the phenomenon on the television newscasts.

The print media have also been very effective in educating the public about the polar vortex. Here is a detailed and very well-illustrated explanation that The New York Times provided online.  Observe the details given and the progressive development of the cold spell.

Countries that have NOT adopted the international metric system of units. [Source: https://goo.gl/ffhGl7 Accessed on: 3 Feb. 2019] Click on the image to view the original and the article.

The enormous amount of snowfall disrupted normal life for hundreds of thousands of people. Many businesses, agencies, educational institutions, and services were closed. Road were covered in snow and ice and highway accidents were numerous.

As always, those people who live on the ‘margins’ were the most severely affected: the poor and homeless people. Most of us in India have only pictures of affluence in America. And most Americans’ picture of India is only of poverty and destitution. Both are incomplete. These ‘margins’ are locations which are hostile to life … and they can exist right in the ‘centre’ of city life. So, living in the middle of a city you are still living on the margins. Affluence surrounds you, but you are not part of it.

There is a lot of homelessness in America. It is a very hard life. Even in the middle of cities there are areas where homeless people try to live their lives. This is a considerably huge problem. The homeless are particularly hit hard by extreme weather patterns.

In many cities, charitable organizations offered shelter for the homeless to be warm and safe inside while the cold spell hit. I even read about a woman who paid for several rooms in a hotel so that homeless people could be indoors and safe.

In times of dire crises (singular: crisis), humanity does respond with kindness. This is important to observe. It gives us hope in these troubled times.

A version of this article appeared in the Deccan Herald Student Edition, 2 February 2016