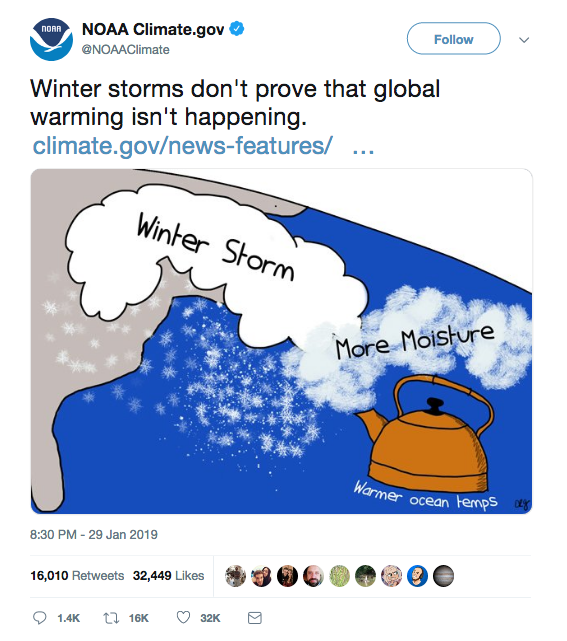 From the end of January through the first week of February and a little beyond, the USA and Canada experienced unusually bitter cold temperatures. Last week, I shared with you some information about the northern polar vortex and its mischief. Up to 24 deaths have been reported and blamed on the cold temperatures the polar vortex brought.

While the USA was poised to experience severe cold temperatures, Australia was experiencing severely high temperatures. This has led to drought, which in turn, led to the death of many animals (domestic and wild), as well as widespread wildfires due to dried vegetation. In places, temperatures soared to 45 degrees Celsius. Many different kinds of warnings went out to people on what to do and what not to do. ( https://goo.gl/VsVWW8 and https://goo.gl/mX39FQ )

During your next heat wave, remember not to drink iced beverages, caffeinated and sugary drinks, expose bare skin to the heat, and consume high-protein foods such as meats. Instead, drink plenty of water at room temperature, wear protective, loose clothing, eat more vegetables and fruits, and stay out of the heat as much as possible.

Perhaps the Australians wouldn’t mind a touch of the northern polar vortex’s temperatures just about now. But it won’t happen. Sorry.

Scientists are saying that the behavior of the polar vortex is one of the phenomena that are linked to global climate change. Their studies offer clear evidence of global warming.

Most people understand it in some way or other. But some completely deny there is any global warming happening at all.

By and large, however, the scientific community shows that this is, indeed, anthropogenic global warming.

Scientists are also saying that these extremes in the weather conditions are due to climate change.

“There’s some evidence that the jet stream, a meandering air current that flows over North America and Europe, is slowing and becoming wavier as the planet warms. The jet stream interacts with the polar vortex, helping bring numbing temperatures further south.

“Scientists also point to a complex sequence of events involving sea ice, which is rapidly diminishing in the Arctic. As the ice retreats, summertime heat is absorbed by the dark ocean that lies underneath. This heat is released into the atmosphere during winter, spurring winds that can disrupt the polar vortex.”

It is common knowledge that the president of the USA, Donald Trump, is not a great lover of facts or science. This is clearly evident in his own words on television and on social media (he’s a compulsive tweeter on Twitter).

Some of the tweets displaying the lack of understanding by the US president. [Source: https://goo.gl/EFoqlH Accessed 10 Feb. 2019] Click on the image to see the full article.

You can also watch video of his different statements on climate change here: https://goo.gl/fo5Kmg It is amazing!

On the social media platform Twitter, he tweeted (click on the images to see a larger version):

This drew world-wide condemnation. Astha Sarmah, a teenager from Assam, had this to say:

Astha’s science point is very important. This is my concern.

There are two aspects to Trump’s lack of climate change awareness, forget about knowledge!

First, he says he doesn’t believe it, as if it’s merely a matter of faith and not scientifically based conclusion.

Second, he keeps saying that if there is global warming (forget anthropogenic global warming), then how come USA is so cold. This also has the problem that he seems to think that the USA is somehow separate from the rest of the world in terms of meteorology. This is breath-takingly ignorant!

During the recent polar vortex event in the USA (and with Australia still suffering prolonged heat wave effects), this is what Trump had to say:

The National Oceanic and Atmospheric Administration (NOAA) responded to Trump with this tweet:

Obviously, Trump lacks in knowledge about climate change, and its causes and effects. Let us, for a moment, presume that he wants to learn about this. He is not listening to the well-qualified scientists in his own government.

You, as Astha (the teenager from Assam) did, could perhaps convey to Trump what the actual concepts and facts are, and educate him.  How would you do it?

This is an important project!

Trump has his hands on the levers of power to help the USA reduce its carbon footprint and provide a part of the leadership in reducing anthropogenic global warming in the coming years and decades.

It is also common knowledge that he hates reading more than a page and prefers most of that to be in pictures. And that, to draw his attention to particular points, officials often insert his name among the points because he likes to see his name.

So, how would you educate the president of USA, Donald Trump?

A version of this article appeared in the Deccan Herald Student Edition, 13 February 2016