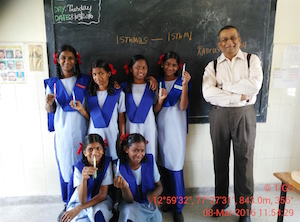 Venn diagrams. The biosphere. Interactions – apparent and otherwise. Children’s intuition. The lighting up of eyes, a comment, an answer, … Each one a Teacher Moment that thrills. This is part of why I am a geographer.

In 2009, I had undertaken a series of workshops for school students of class 8 – 12 on the geography of climate change. There is only one way understand the many ins and outs of this phenomenon and what it could mean to life on Planet Earth: the interdisciplinary approach; the approach that makes connections.

Picture this: twenty five girl children of class 9, at Audugodi Girls High School, Bangalore. Kannada medium. All very silent; they had been told “Don’t talk in class!” (I had to tell the class prefect not to say that to the children as they entered the room in a neat, orderly line.)

The workshop began with a look at the four spheres: atmosphere, lithosphere, hydrosphere, and biosphere. The first step was to understand what is in each of these. This was easily enough done as the students had learned it in their textbooks in the form of a list of some kind.

Then came the concept of interconnections. Things got much more interesting here as I would try to take the students on journey of words and (almost) dancing through the concepts. It was all about how the energy from the Sun caused differential heating all over the planet. This differential heating is not okay for Nature. Nature tries to spread things around and try to even it all out a bit.

Enter physics. We then talked about how heat affects air, how air moves around, and that movement causes. Pretty soon, the diagram that you see below emerged. Basic idea is that heat connects all the spheres.

Then, I expressed a little (mock) concern. “Oh! H’mmmm … Wait! There is a problem. I have to show where the biosphere, but alas, I don’t have any space to show it on the diagram! Could someone help me show the biosphere, please?”, I pleaded.

Twenty five girls jumped up pointing towards the screen on which the diagram was projected, and shouted, “Right there! RIGHT THERE!!” They were excited! I had them just where I wanted them.

I played along. “Elli?” (Where?) More excited screaming and pointing. I feigned total confusion and asked for a volunteer to come up and show me on the screen. One girl just jumped up from her seat and tore to the front of the class and, in one simple move, showed me where the biosphere should be shown. And she did this triumphantly!

I was not done having my fun yet! I asked her, “Why there?”

Her reaction? A look of great pity for me, as if she were thinking, “You don’t even know this? How did you ever come this far in your life? H’mph!” Aloud, she said, “What do you mean ‘why there?’? Where else would it be?”

Meanwhile her classmates are equally appalled at the level of my ignorance! The problem was, I was trying to tell her to justify her answer. I couldn’t find the correct word for it and my question came out all wrong. Never mind, though. It taught me something – the power of intuitive geographic thinking, and one more way to get a teacher moment.

A teacher moment is defined as that moment in an interaction between a teacher and students, the student’s eyes light up with understanding and they have this excited look of, “Aha!! That’s it! I get it!!” This is the moment all teachers (should) live for, as professionals. It is a very sacred moment and one during which I am very conscious of a connection between the student(s) and me; a moment when we have connected with each other in understanding something.

Back to my story. So, amid a lot of screaming on their part, dancing on my part, the girl finally understood that I wanted her to justify her answer. She did. In the most succinct way. I turned to the others and asked, in all seriousness, “No! Really? Is she right?” Twenty four voices gave a resounding scream of approval.

Without having been introduced to set theory or Venn diagrams in their mathematics class, they had applied it to geography … brilliantly!

From there on, the workshop was even more enjoyable; it was a breeze. They followed me very closely. When I asked other questions and one or other of the students answered, there was a hush in the room as everyone listened to her. When she finished, we would have a short question-and-answer session about what she had said and move on.

Thus it was when I asked them what are some of the human actions that are contributing to global warming, one girl, spoke very slowly (she had a slight speech impediment) and deliberately, bringing it all to the immediate, local, environment. She did not talk of deforestation in the Amazon jungle or the Western Ghats or Indonesia. She brought her remarks home to the neighborhood of the school: Hosur Road.

At the time, huge, old, vast trees along that stretch of Hosur Road, passing the campus of the school, were being chopped down for a road-widening project. (That has since been completed – traffic moves more smoothly now, but the landscape is hideously ugly without those grand trees!)

She spoke about that project and its impacts: loss of oxygen contribution, loss of carbon dioxide absorption leading to more of it being in the environment there, more dust from traffic that the trees would have “filtered” out of the air, loss of shade, more vehicles making more noise, spewing more smoke, …

And she spoke with a passion that showed her sadness at what was happening to her local world. Yet again, she showed how much young children observe and connect, and that they care about them.

Me, I did not have a teacher moment that day; I had teacher three hours! This is but one example from my life.

It never gets routine. It is always thrilling!