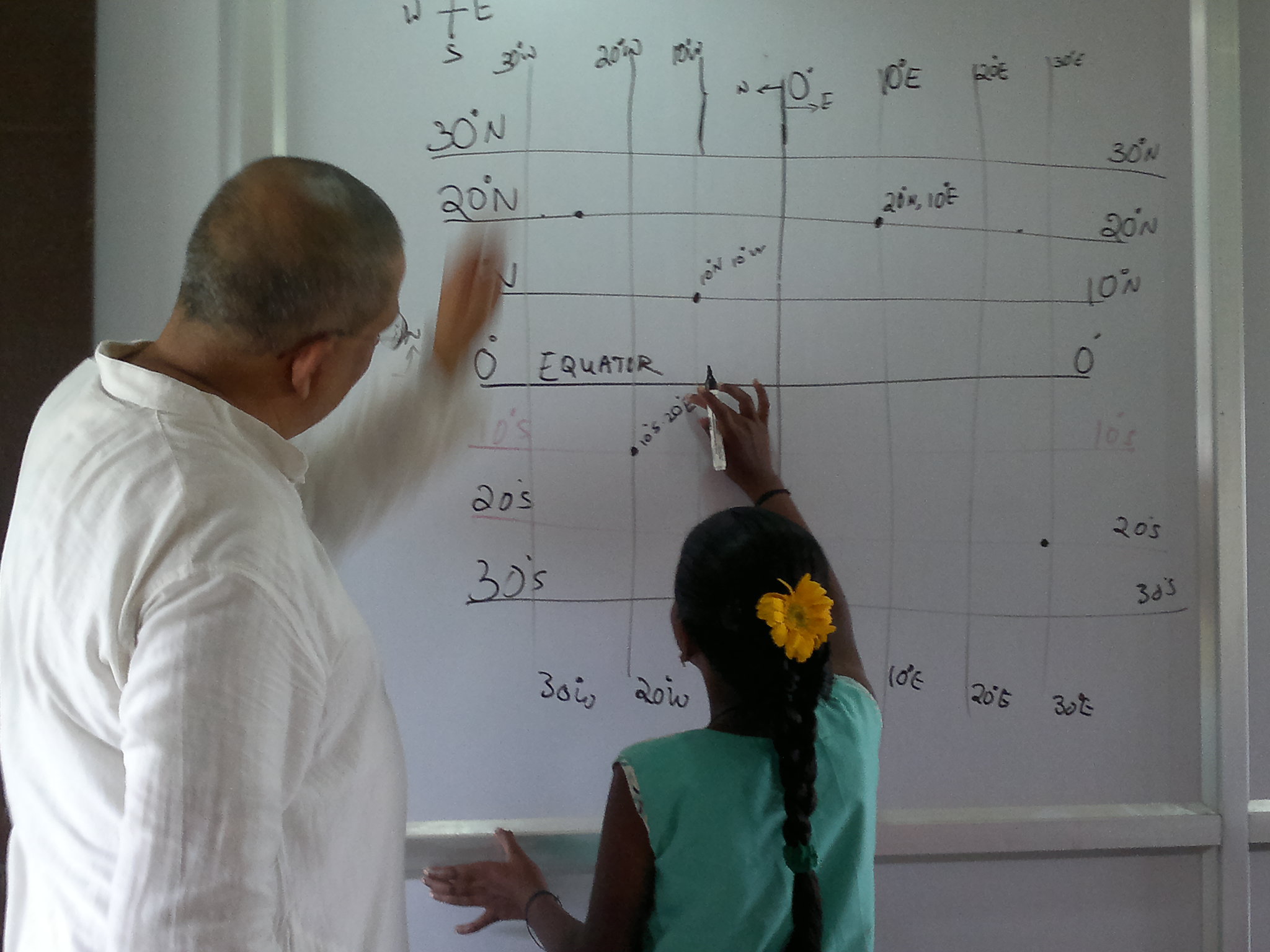 For one of my workshops with children (at teachers, too), I begin by taking them out to a nearby open space. Ideally, this would be a field, without paving.

I ask them, “Who knows how to play hopscotch?” (That is paandi in Tamil or kunte-bille in Kannada.) Most often, only the girls raise their hand. The boys don’t. This is a girls’ game, you know? Boys don’t play this!! Gasp! Perish the thought!

This is gendering … boys’ games and girls’ games and that sort of thing. So, I tell the boys that after the girls play a round or two, the girls will teach the boys how to play. Oh! Girls teaching boys? Perish that thought, too! So suddenly, several of them remember that they actually do know how to play this game. So, after the girls have played a few rounds, the boys play, too. And enjoy it immensely! How liberating it must be for them!

Next I suggest, say, lagori (also known by many other names such as seven stones). How many of know how to play this? Boys’ hands go up, not the girls’! So, the roles are reversed, and often I find some girls who say they also know how to play it. Lagori, you see, is a boys’ game! A girl playing such a game would be labeled as being, at least, a ‘tom-boy’!

This gendering is weird but widespread.

After we have played a few such games, we all go inside to the room where the workshop is supposed to take place. Once we settle down here, we talk about the games and the geography connections.

Then we look at another geography connection.

Notice that when you want to play almost any game, the first thing we do is to draw boundaries. And boundaries are lines. On an unmarked playing field, you cannot play lagori or kunte-bille! How would you know the “in” from the “out”, the “foul” from the “score”; the sequence in which you perform actions in the game; the rules for the different kinds of spaces you create; and so on.

Thus, no lines, no game! Think of the many examples of games you can’t play without lines … lagori, kunte-bille, cricket, football, chowka-bara, etc. Sometimes, we don’t draw the lines on the ground, but create make-believe lines that we agree upon and play the game.

Lines! Lines!! Lines!! The chowka-bara scheme with routes. Source: https://goo.gl/AgQC3L [Last accessed on 11 August 2018]. Click on the image to view a larger version.

The lines we draw on the ground create a space on the unmarked field. This space has rules that are generally agreed upon. They provide many opportunities to each player and each team; they also place restrictions on them. These rules can be followed only when we have lines. Thus, those lines are crucial for our play. That’s how a game is fun … because it has rules that you can mark on the ground.

Similarly, the vast surface of Earth is difficult to navigate without having a generally accepted set of lines, and rules that go with those lines. Hence we have draped a grid on Earth’s surface. This grid has horizontal parallel lines (the latitudes) and the vertical convergent lines (the longitudes).

The latitudes and longitudes cross each other all over the globe. Each can be subdivided into smaller and smaller bits: degrees, minutes, seconds, and so on.

In this grid, no latitude and longitude cross each other more than once. For example, 12˚N latitude crosses 76˚E longitude only once. So, a place located where these two lines meet is the only place with the address 12˚N, 76˚E. No other place on Earth has that address! This is why, latitude and longitude pairings are called unique locations. This system is called the DMS system: Degrees, Minutes, Seconds. For example: 12˚29’59”N (read as 12 degrees, 29 minutes, and 59 seconds).

The problem with this format of using a letter to denote the direction of the latitudes and longitudes is that you cannot use it for calculations. These calculations are vital for everything from map-making to locating enemy targets in warfare to calculating flight paths for commercial jetliners.

So, a system called the Decimal Degree (DD) system is used. In this system, we use:

You can readily apply your knowledge of mathematics and see how the numbers can easily be used for calculations.

If you studied graphs in your mathematics class, you will the similarities between the DD system and the graph system.

You can read more about the DMS and DD systems on this Wiki site.

Featured image: Studying latitudes and longitudes.  The Institute of Geographical Studies, © 2013.
An earlier version of this article appeared in the Deccan Herald Student Edition, 11 July 2018.