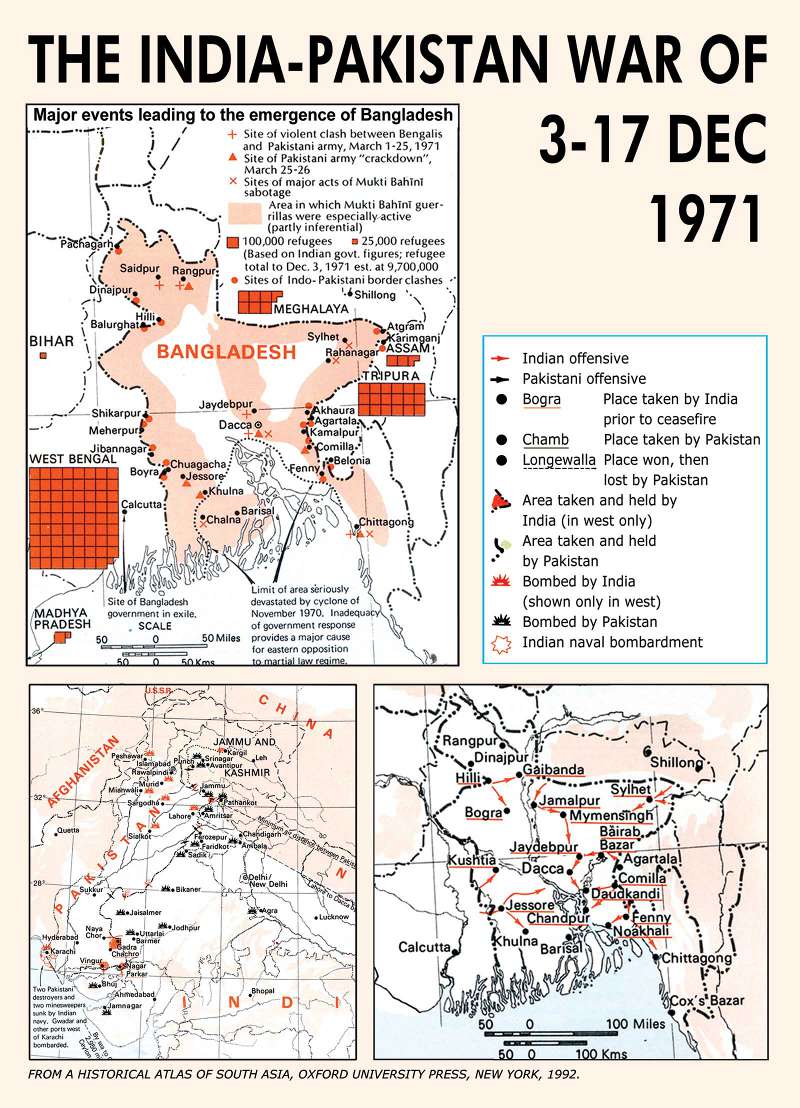 It was the 2nd period. Eighty of us, all boys, at National High School, Standard 8, Room N7 were restless. We were milling about, making noise.

Suddenly, Mr. B. Narasanna (known by his initials as BN) walked into class.

We quickly cheesed it and got to our seats.

We had been in 8th Standard since 1 June 1971. We had fantastically good teachers.

The school’s infrastructure was quite another matter. We didn’t have maps for classroom use; only small maps that were a vague, half-hearted, token of a nod to the importance of the Social Studies curriculum. Our physics and chemistry labs were rather better-equipped, though. A situation that still exists in most Indian schools.

On 3 December 1971, war had broken out between India and Pakistan over a crisis in the then East Pakistan.

Check out this map of the relative locations of the countries upon partition of India.

When, on 4 December, Mr. Narasanna walked in and we cheesed it, we were all resigned to studying another dreary chapter in the horrid little textbook.

He had other plans.

He said, “Today, we will discuss world news for 5 minutes.”

What he did next freaked us out – in the most positive way!

He cleared the blackboard, took a piece of chalk, and drew the continental outline map of the whole world! “Zapped” is far too weak a word to describe what I felt at the moment, and what it has come to mean to me in life.

He was a brilliant caricaturist as well, as we found out during that class.

He proceeded to describe the various people (the Indian Prime Minister Indira Gandhi, Pakistani military ruler Gen. Yahya Khan, his junior in charge of East Pakistan Gen. Tikka Khan, U.S. President Richard Nixon, and so on…); issues (the difficulties of a split country, separated by a vast expanse of hostile territory, the exploitation of one part by another, the opposition of East Pakistan to the power centered in West Pakistan), and of course, the Geography of it all.

His lesson that day found expression in this blog post decades later.

Negotiations that had preceded the outbreak of war were enacted in the Kannada (official language of the state of Karnataka) that we kids spoke. It had us all in splits, pealing with laughter, but we were very alive to the destruction that had been unleashed.

And the instruction that was underway.

The period had ended. The teacher for the next period was waiting at the door, impatiently looking at his watch … I couldn’t even blink, for fear of missing something BN would say.  Best of all, we didn’t have to deal with the annoying textbook!

From that day, my newspaper reading became more intense and focused. (Until that day, I used to read only the headlines daily.) I remember going back home and reading the newspapers for the past 3 days and being thrilled at how much I had learned.

For the duration of the war (3-17 December 1971), every Social Studies class (Geography, History, and Civics) was devoted to the unfolding events of the war. The military movements, the Geography of the war, the various personalities involved (shown in hilarious cartoons that he drew on the board) … all came alive in BN’s classroom.

We did not have television in those days in India. BN’s classroom was live theater. He hated the textbook and dispensed with it in short order. Every chapter was dutifully dispensed with as quickly as possible. Then, he would tell us stories. What a masterful narrator!

On the 2nd day of the series, we timed him drawing the map. He saw that, smiled, and asked how he had done. One of the kids in the front row, who had a watch, told him (I was in the 5th row).

On the 3rdday, whoever had watches (I didn’t) became the starters. He would stand at the blackboard, poised with his chalk, and one kid would say, “Go!” and he would draw. I vaguely recall the record being something like 1 minute and 40 seconds.

Thanks to BN, I developed a keen interest in reading newspapers more in depth. He taught me how Geography is life. He showed me how human proclivities shape our geographies. He showed me things are connected to each other as no one had done before him. He lit the lamp of the joy of Geography study in me. He also taught me to get past the syllabus and see it in my life!

He continues to inspire me in all my studies. He is one of the two people who are the inspiration behind the starting of TIGS.

I’ll tell you about the other one later.

I’ll leave you with an interesting map summarizing the main events of the war.