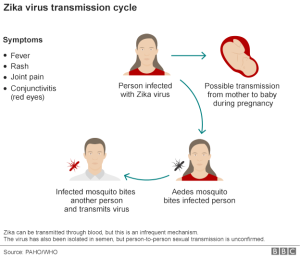 Babies being born with defects. Pregnant women advised to be careful where they travel. Other women told not to get pregnant. Travel agents worrying. Geography. And a mosquito in the middle of this mess.

Power and size are not directly related. A tiny thing can have huge power. Viruses are deadly reminders of this. Geography helps us to better understand the latest pandemic – Zika.

The Zika virus first reported in monkeys in Zika forest near Entebbe, Uganda in 1952.

Subsequently, its range has been mapped. While outbreaks have been rare, one in 2007 occurred on the island of Yap in the Federated States of Micronesia. After that, since April 2015, an outbreak occurred in Brazil and has turned into a pandemic (a disease that spreads across countries).

The Aedes genus of mosquitos are the vectors for the Zika virus (i.e., they carry the virus and transmit it). Look at a distribution of the species of Aedes here. The transmission method is the same with other mosquito-borne diseases. Here is a map of the current outbreak as of 26 January 2016.

Read up on the symptoms, prevention, and treatment of Zika.

Brazil has been at the centre of the current outbreak. Some researchers believe that the virus came to Brazil during the 2014 football world cup. They estimate some 1.5 million people have contracted the virus since then.

As with so many pandemics, people who are socio-economically marginalized (the poor) are the most vulnerable because of their marginal geographies. They live in areas that are crowded, with inadequate sanitation that offers the mosquitoes breeding spaces, and have less access to health care than others. Social status and geographic characteristics of people are closely connected.

Scientists believe that one of the outcomes of the disease is that when pregnant women get infected, the baby in the womb is severely affected and many are being born with a birth defect called microcephaly (micro small, cephaly head) where the baby’s head is disproportionately small and the brain is damaged.

Brazil is to host the 2016 Olympic games. People from all over the world are expected and expecting to attend. That’s a huge population of visitors crowding around. They could all be potential victims and could spread the virus in their own countries through local mosquitoes transmitting from person to person.

The variation of climate with latitude and altitude is a major factor in Zika’s spread. It is summer at present in the Southern Hemisphere. Given the socio-economic levels of most of the population, most people can’t afford to stay in air-conditioned places all the time. They wear minimal clothing because it is so hot. Their clothing does not cover them adequately to prevent mosquito bites. In any case, no one can be 100% covered all the time. All very conducive to the spread of Zika.

Several countries have issued travel warnings to their citizens, particularly women. In some countries in Central America, women are being advised to avoid pregnancy until after the outbreak is gone. This is complicated by the fact that local religious beliefs may lead women not to use condoms to prevent pregnancies.

Meanwhile, travel and hospitality industries are beginning to worry about how much their business will suffer because of the outbreak. If people decide not to travel to Brazil for the Olympics, these industries could suffer financial losses.

When those who do travel to the Olympics return to their home countries, how are they to be screened at the port of entry? This gets even more complicated if people visit other countries on the way to or from the Olympics.

To prevent and contain the transmission of diseases by mosquitoes, the common practice is to spray insecticide and to make sure there is no stagnant water in which they can breed. These measures have proven inadequate in this outbreak. In Brazil, in Rio de Janeiro and elsewhere special, genetically modified male mosquitoes are being released. These mosquitoes have a lethal gene that causes their offspring to die before reaching adulthood. This is still a controversial method and its implications are not yet understood.

One of the factors in the spread of diseases to new areas and intensification in existing areas is climate change. The speed with which this is happening is cause for serious concern.