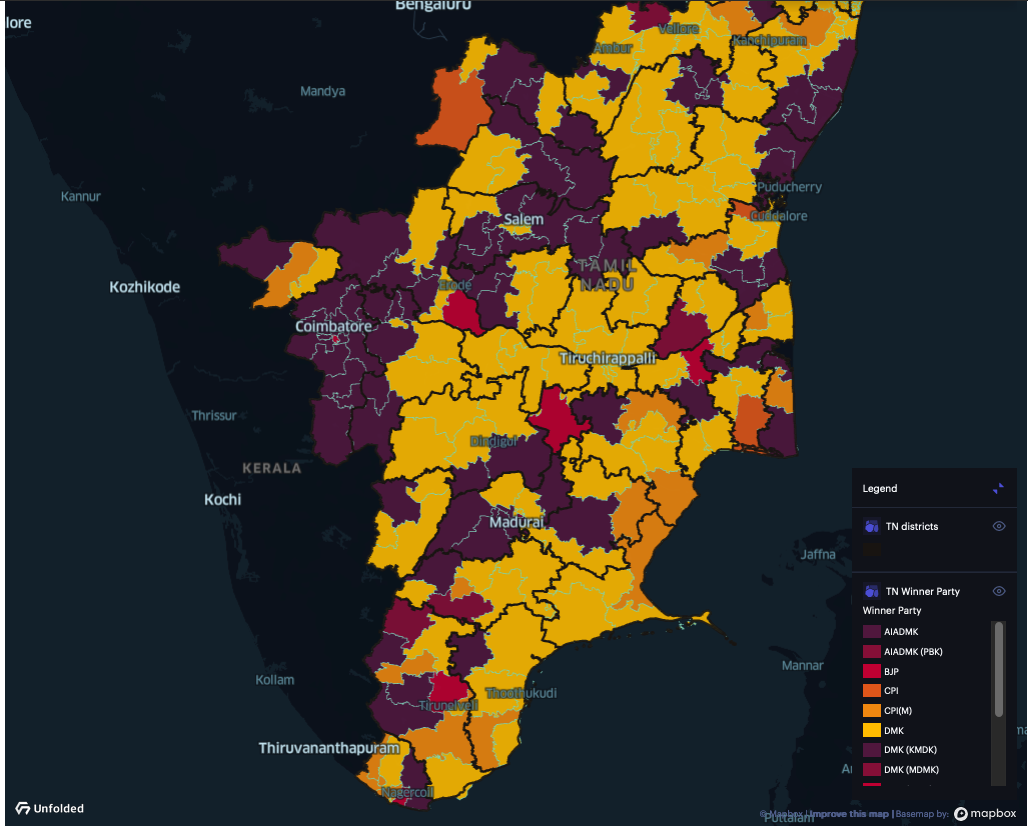 Maps can be made on paper. However, paper maps have many limitations. To explore data in different ways immediately, interactive digital maps are better. The growing field of geo-informatics gives us many tools to make such interactive maps. Geo-informatics combines science and technology to visualize geographic data.

Using the 2021 Assembly Elections in Tamil Nadu (TN) as a case study, I will share with you a few interactive digital maps as examples of geo-informatics tools. Learning the various aspects of mapping can be a starting point for us to ask social science questions. Asking such questions can help us understand the subjects better.

Specifically, this essay helps us address the geography question 1 above.

In this context, applying the four geography questions becomes much more specific:

How are maps made?

There are various ways to create and display maps. The tools available today are far more sophisticated and detailed than the ones used before.
The Babylonians were among the earliest makers of a world map [Wikipedia: Accessed on 16th July 2021]. They depicted the terrain around them. However, symbolism played a greater role in the depiction of their land over scientific methodologies. Their map showed a circular area surrounded by water bodies. This map fit their idea of the world, rather than being scientifically based.

Babylonian map of the world. Source: Wikipedia. Click on the image to view a larger version (it will open in a new tab).

Today we have many tools such as Light Detection and Ranging (LIDAR), infrared cameras, satellites, etc. Using these, we are able to collect large amounts of data about many different aspects of Earth. These help us better view and understand our home planet.

The data derived using advanced tools are about places on Earth. Therefore, they are called geographically referenced data. These are represented on maps. Mapping the results of the TN 2021 elections is an example of the application of geography.

I made four maps of the results of the 2021 TN assembly elections:

In this project each map is treated as a layer. The first one serves as the base layer. These maps are interactive. If you wish to reset the maps, please reload the entire webpage.

You may notice a hierarchy of places in the map. India is a country. TN is one of its states. Within TN there are districts. Each district has several Assembly Constituencies . Each AC covers several talukas. Each taluka includes several villages (in cities there are municipal corporations). These maps deal with the AC.

Explore (using the zoom in/out feature in the map):

NOTE: If you do find a pattern and describe it, you will likely be creating regions in TN.

This map shows the runner-up party in each AC.

Map #4 shows the margin by which the winner and runner-up are separated.

I started this essay with the four questions of geography:

In this essay, I explored the first question to look at voting patterns in TN’s 2021 Assembly Elections using online maps.

I chose online maps because they allow us to explore data easily and immediately. Paper maps don’t. Online maps can be easily shared with others within seconds.

Geoinformatics is a rapidly growing field. I hope this essay has made you more curious to explore it further.

In my next essay, I will show you how I made these maps.

Thanks to the following for help with this project:

I am a homeschooler living in Chennai. I joined The Institute of Geographical Studies (TIGS) as a student under the Geography.over.Distance (G.o.D.) program in 2015. After my first experience at the International Geography Youth Summit (IGYS), I started to volunteer at TIGS. Computers being my field of passion I decided that it would be best if I engage more with the technical team of TIGS.