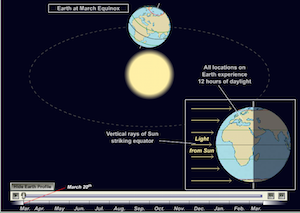 Copacabana and Ipanema beaches in Brazil. And, alas, Zika. Holi in India. Topsy-turvy world designed to give kids in geography classes headaches! And, of course, the dreaded annual exams. Summer vacation soon to come! Well it’s jaggery and neem!

For a long time – millennia, in fact – humans believed in an Earth-centric universe where our planet was at the centre of all the action and all the other heavenly bodies went around us. That is until that brilliant genius Nicolaus Copernicus (19 February 1473 – 24 May 1543) came along and showed us the heliocentric (helio = sun) order of things. We were not the centre, the Sun was. And, like all major scientific discoveries, nothing was ever the same again.

During Earth’s annual sojourn around the Sun, there are certain interesting alignments that have great geographical importance. One such alignment is scheduled to happen this year on 20 March, at 10:00 IST (Indian Standard Time, though often called Indian Stretchable Time!).

On that date, we experience an equinox (equi = equal, nox = night) – when the whole world has equal day and night. The Sun’s position is vertically over the Equator, 0˚ latitude. If you live along or very near the Equator, you will be in sizzling heat – provided your altitude is not high.

In the northern hemisphere (hemi = half, sphere = globe), this marks the so-called Vernal Equinox (vern = spring). The dictionary also says that this is a synonym (a word having the same meaning as) for youthful, fresh, new. That certainly sounds like spring, doesn’t it? New leaves sprouting, new flowers blossoming, breeding of animals, and so on.

For our part, we start mugging up for the inevitable annual exams where we hope to score “centum” in any and all subjects, parents fret, you fret, teachers fret, school principals fret …

We also celebrate with color (holi), kite-flying (“Go fly a kite!”), and so on … but everything with lots of color. We have decisively left the chill of winter behind us and are getting ready for a period of warmth that …

… very quickly becomes searing, sizzling, baking heat in which we feel like we are baking! Yet, that heat is needed for the southwest monsoon engine to crank up and deliver rains to us. At least, we hope the rains will be plentiful and timely.

Meanwhile, further south of the Equator, people are bringing out their warm clothing. Especially those living at higher altitudes. They are getting ready to hunker down for the cold season. The March equinox – our spring or vernal equinox – is their autumnal equinox.

We bake, they freeze!

Ah, but wait! Things reverse in due course. After passing through the June solstice (the northern hemisphere’s ‘summer’ solstice, the southern hemisphere’s ‘winter’ solstice), we reach another equinox. The next one is in September. In 2016, our autumnal equinox occurs in Bangalore at Thursday, 22 September 2016, 19:51 IST. (You will probably relaxing and remembering the International Geography Youth Summit you attended, ending at 17:30 IST that day!)

This time around, we will begin getting our warmer clothing out and getting ready for our winter. The Australians, for example, will begin packing away their woollen clothes and start bringing out their shorts and T-shirts, heading for the beaches with their surf-boards, and heartily greeting each other with a robust G’day, mate!

For them, this is the vernal (spring) equinox.

The beaches of Ipanema and Copacabana will again be full of people playing beach volleyball, swimming in the ocean (quick: which ocean?), getting tanned, and generally having a grand old time.

So, around the Equator, they experience two sweltering summers!

Provided they don’t live in the high mountains.

A version of this article appeared in the Deccan Herald Student Edition, 17 March 2016.