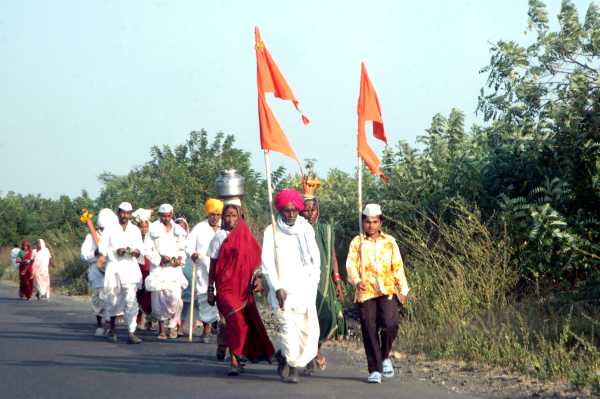 Bhakti and geography are intimately tied. They have influenced each other in remarkable and enduring ways. This is of great interest to geographers.

Many humans feel a need for spirituality in their lives. Throughout human history and geography, humans have found many different ways to access spirituality. Art, meditation, religious activity, service to others, and so on.

One of these, religious activity, includes many kinds of performances. The moment you say ‘performance’, you have to invoke geography and history. These geographies and histories may not be physically verifiable – e.g. this is the rock on which Rāma sat when he spoke to Hanūmān. For most people, it is not important that you cannot find three or four verifiable sources that confirm this to be true.

This is where faith comes in. Faith is not subject to scientific verification. You accept something as true without waiting for it to be scientifically verified. Some people call this ‘superstition’. Either way, it has enormous power to move human emotions and life.

The Samskrtam word, itihāsa, is translated thus: iti = thus, ha = indeed, āsa = was. It is an assertion that it was indeed thus. As with most things in this world, this concept has the power to bring people together or to drive them apart violently.

Many religious observances of groups of people involve certain elements. Recollection is recalling events of a (usually distant) past that may be itihāsa. That recollection then is converted to re-enactment of those events. Through this, there is re-experience of those times and events, as if they are occurring here and now. The repetition of this in many places and times, keeps the belief system going.

Every year, during the month of Āshādha (approximately June/July), vast numbers of people from all over Maharashtra embark on a pilgrimage from wherever they live, to Pandharpur. Imagine a large number of streams all flowing towards a central sea – the paths that these pilgrims take are the streams and Pandharpur is the sea.

Recalling this, the pilgrimage to Pandharpur becomes a major event through which people re-enact the sacred experiences of the many saints associated with the holy place.

This pilgrimage is called Varkari. It is a huge phenomenon that transforms the geography of Maharashtra in very visible ways. Here are a few points:

Using a combination of online and offline resources,  you can create an interesting map of the Varkari routes! Give it a try! If you do, you really must share it with everyone at the International Geography Youth Summit – 2018. Here is one resource that might help you get started.

The Way of St James

Subsequent history sees this idea re-inforced through the promotion of the belief that St James’ (Santiago in Spanish) remains were found there. His journey there was one of faith, in order to spread the message of Christ, his own guru. This spiritual lineage (guru-shishya paramparaa) makes St James an important personality, and through association with him, the place called Santiago de Compostela in northwestern Spain has become a sacred place.

Hundreds of pilgrims go on foot from different (and often far off) places to Santiago de Compostela. Again, like the Varkaris, this is a journey to connect with an old bhakti tradition – a sacred person’s presence and sacred experience at that place makes the place sacred.

Here is another map that shows you the routes.

Check out the location of Santiago (de Compostela) in this map.

Map of Spain showing the location of Santiago (de Compostela). Click on the image for a larger version; opens in a new tab. (Source: https://goo.gl/hBAequ)

Read this map carefully to understand the physical geography through which the routes of the previous map pass. This topography makes the pilgrimage, more meaningful! How?)

A version of this article appeared in the Deccan Herald Student Edition, March 2018.