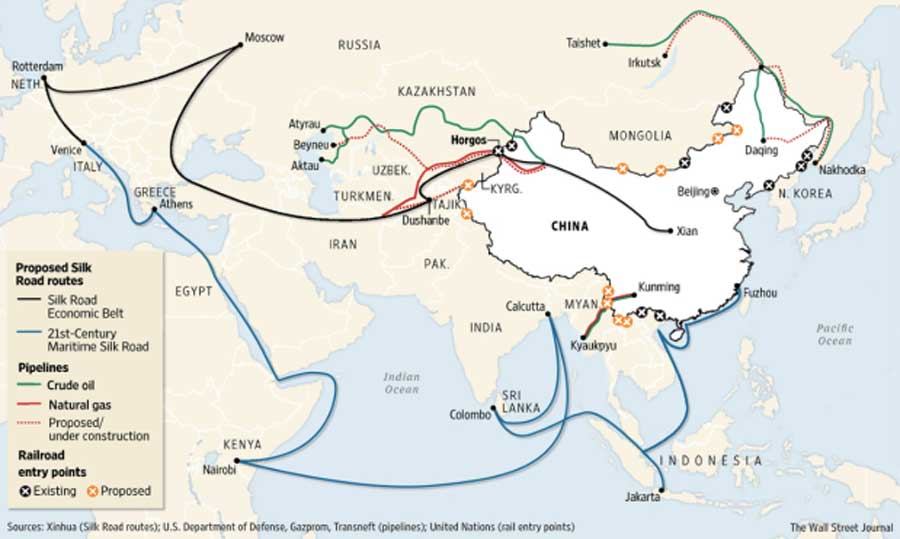 International geo-politics (geography-related politics) is a very tricky process. It requires a good knowledge of history, human psychology, economics, anthropology, etc. And, of course, geography. So, keep your atlas handy while you read all this.

Last week, I talked about the encirclement policy that the Chinese are pushing to assert their power in Asia. They are not alone in trying to do this. The USA is also trying to do this in order to ‘contain’ China – to keep China’s power under control.

There are several concerns that the USA has in the region. However, the root concern is that they want to maintain their super-power status. After the former USSR (the Soviet Union; Union of Soviet Socialist Republics) collapsed, the USA emerged as the sole super-power in the world. Geo-politically, this was called a ‘uni-polar’ world.

Russia, the biggest country of the former USSR, has been working hard to emerge as a competing super-power in the world. So is China. This competition is contributing to the aggressive military tactics of Russia in its neighborhood and in Syria. It also contributes China’s policy of encirclement. The Chinese are using economic means more than military means.

This is the plant that produces a latex (milk-like thick liquid) that is used in making the narcotic drug opium.

Opium seed pod producing the latex (milky substance) from which opium and heroin are made. (Image source: https://goo.gl/m2T6fx) [Accessed: Nov. 2017]

The world’s largest producer of this is Afghanistan. It is estimated that nearly 11% of Afghanistan’s economy is dependent on opium production.

One of the narcotic drugs derived from this latex is heroin (not to be confused with heroine, though both are pronounced the same way). Heroin is a deadly addictive drug that kills! It has a world-wide market. Look at the maps showing the geography of heroin here and here (under Heroin: Afghan Poppies and Golden Triangles). The international movement of heroin is a cause for concern for many countries, including India, western countries, and most others.

Nations worry about these kinds of substances because they weaken the economy. Drug trade results in money being taken into the ‘black’ market. It weakens the productive citizens in the population – you can see these data for any country here; the youth of a country are particularly vulnerable.

Narcotic drugs are illegal, except in use in pharmaceutical products such as pain-killers and such. Therefore, the movement of narcotic drugs such as heroin gives rise to a vast criminal network involved in drug trafficking. This happens because so much money is involved. In turn, this means there is a lot of violence including murders.

Obviously, no country wants this kind of thing going on within their borders.

So, how are they to deal with it? One is to find drug traffickers and users in their own countries and arrest them, etc. The other way is to try to prevent the production of the drug at the source.

This brings us to Afghanistan and the heroin trade. And the USA’s concern over this.

There are also many terrorist organizations operating in the region, particularly in Afghanistan and Pakistan. In the 1980s, the USA had actively supported earlier versions of these organizations to fight the occupying USSR army in Afghanistan. The USA called them ‘freedom fighters.’

The USSR left. But the ‘freedom fighters’ stayed. They have a lot of weapons from those years. They are perpetrating terrorist atrocities in many parts of the world. This is a global concern.

Afghanistan and Pakistan are considered the two strongest sources of terrorism. The same USA now is trying to quell these terrorist organizations. How times have changed!

Meanwhile, India is also facing terrorist attacks and identifies Pakistan as the major source of the trouble. India collaborates with the USA in this matter. Recently, the USA’s Secretary of State (Rex Tillerson) visited Pakistan and India. During this visit, India and the USA re-affirmed their commitment to fight terror in the region. However, India said no to some of the demands of the USA. Why? Because each country does, and must, act in its self-interest – that is at the heart of geo-politics.

Pakistan is both a victim and a sponsor of terrorism. This has been fairly well established. The population problems in Pakistan combine with the terrorism issue, and its own geographical history, leading to low economic growth. The Pakistani economy is in very bad shape.

This leads Pakistan to rely heavily on foreign aid. Much of that aid comes from the USA in the name of fighting terrorism.

In geo-politics, ‘there is no such thing as a free lunch.’ The USA demands certain things in return for the aid it gives Pakistan. Chief among these:

There’s a LOT more to all this. We will pick these threads up next week.

A version of this article appeared in the Deccan Herald Student Edition.