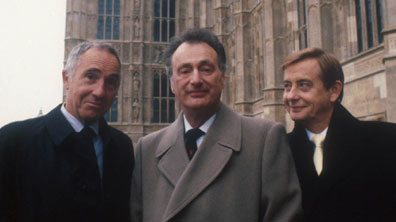 It’s the end of the year according to the Gregorian (or “western” or “English”) calendar. You have just about finished your term exams and freshly hated geography! I am so sorry you had to feel that.

On the other hand, if you have ended up liking your school geography, I applaud you. You will go far! (See what I did there? No? Never mind.)

Many of you will have some time off from school until the (Gregorian or Western or English) New Year. I thought it would be good to end the first term of this geography column on a funny note. But there IS a serious message behind that funniness – Know Your Geography! It matters!

In the 1980s, BBC aired a brilliant comedy series titled “Yes, Minister.” Then came a sequel, “Yes, Prime Minister.” The series featured a rather clueless but generally well-meaning politician, The Right Honourable James Hacker, MP who started off as a back-bench MP, then became Minister for Administrative Affairs (a rather insignificant department). Here he works with Sir Humphrey Appleby, a suave and ambitious, and not entirely honest Permanent Secretary and Bernard Woolley, Principal Private Secretary to the Minister.

The entire saga of Mr Hacker as Minister (and, later) as Prime Minister is replete with amazing political keenness. And, to my added delight, geography!

In many episodes in the series, the lack of knowledge of geography and the foibles that that leads to are shown most hilariously. I used to screen some of these episodes in my undergraduate geography classes when I taught in the USA, particularly for the chapter on political geography.

Here’s a conversation from an an episode titled “A victory for democracy.”

RW: There are 157 independent countries in the world. We’ve dealt with them for years. There’s hardly an MP who knows anything about any of them.

HA: Tchh… Show them a map of the world; most of them have a job finding the Isle of Wight.

RW: Where is the Upper Volta?

HA: What is the capital of Chad?

RW: What language do they speak in Mali?

HW: Who is the president of Perú?

RW: What is the national religion of Cameroon?

HA: You should stand for parliament!

This episode was aired in 1986. How would you update the factual information in this piece of dialogue and answer the questions?

Or do you want to stand for parliament?

In yet another episode, “A Diplomatic Incident” (embedded at the end of this post), notions of international geography concepts are used to create, and eventually overcome, a comedy of errors … in fact, total mayhem. Serious concepts, with fictionalized examples based on many real events, all woven together to keep you in stitches and having to rewind again and again to catch that joke you missed because you were laughing so hard!

In “A Diplomatic Incident”, notions of sovereignty, jurisdiction, frontier, protocol, etc. – all inextricably and intricately intertwined with geography – come into play. You will have to learn some background of the Channel Tunnel (or Chunnel) linking the UK and France via a railway under the English Channel. Get your atlas out and look at the locations of these. Check with Professor Wikipedia, the all-knowing Wise Person of the Internet, and read about the places at either end of the tunnel and how the Chunnel has impacted both the British Isles and continental Europe. THEN, watch this episode.

You will also learn the importance and power of (the English) language, particularly wielded by that ace manipulator, Sir Humphrey Appleby.

Remember that during that time, there was the infamous Cold War on. Europe was divided by “an Iron Curtain” – western Europe (democratic, capitalist; well, kind of) and eastern Europe (dictatorial, socialist; well, kind of). Plenty of allusions to the geopolitical situation of the times abound in this series. The looming presence of the USA in UK (indeed, in European) politics is beautifully summed up by Mr Hacker when he bitterly complains, “We don’t have any power really … we are just an American missile base.”

Basically, this entire series is a hilarious way to engage with geopolitics and history of the Cold War era, especially of the UK. It also provides you an excellent example of how history and geography can make for funny fiction in the hands of talented writers (in this case Antony Jay and Jonathan Lynn). Finally, it can also help you sharpen your language skills by observing the power of the carefully chosen word, turn of phrase, and euphemism – though Sir Humphrey uses this to advance his own, often nefarious, agenda.

Generally, I am vehemently opposed to “random factoid” or “GK” kind of geography. In this case, I enjoy it because it is all in context. With some reflection, you can understand why it is important.

Here is an example: Bernard Woolley, handling a flood of phone calls as high-level international delegations are flying in to attend the state funeral of Mr Hacker’s predecessor: “No! We can’t have alphabetic seating in the abbey! You’d have Iraq and Iran next to each other. Plus Israel and Jordan, all sitting in the same pew. You’ll be in danger of starting World War III!”

Excuse me, I must rush off. Mr Hacker is knee-deep in the soup and needs my help.

Now, where did I keep my atlas??

Here is the episode, “A Diplomatic Incident”:

[A version of this appeared in Deccan Herald student edition on Monday, 23 December 2013.]