Who gets to say “Happy New Year” first? 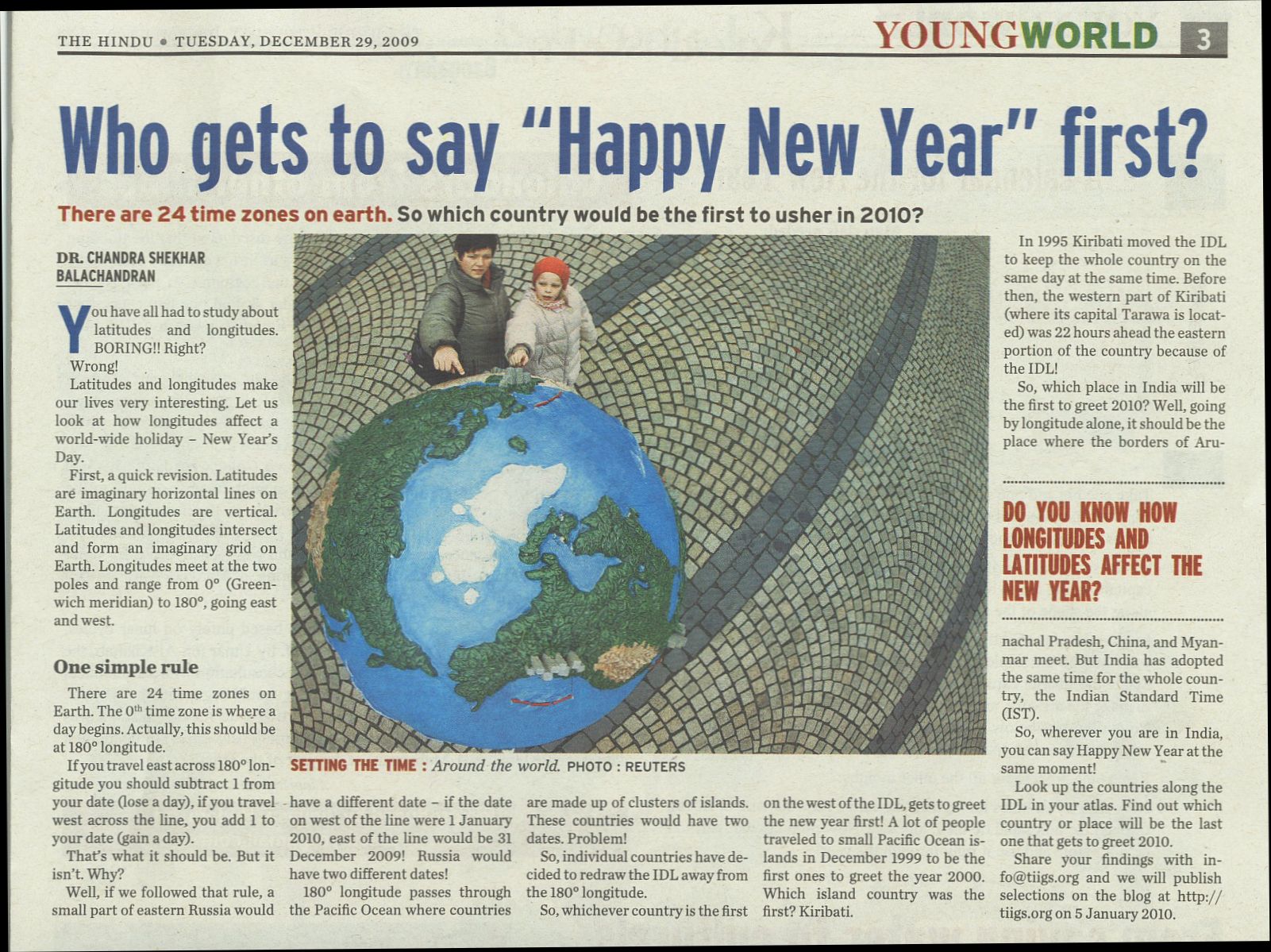 Who gets to say “Happy New Year” first is all a matter of longitude. Or is it?

There are 24 time zones on Earth; each time zone being one hour different from the next one. The “0th” time zone is where a day begins. This could be any old longitude. Actually, by convention, this is 180° longitude (the Antimeridian). Thus, the Antimeridian would also be the International Date Line (IDL)

A view of the latitude and longitude grid on Earth.First, a quick revision. Latitudes are imaginary horizontal lines on Earth. Longitudes are vertical. Latitudes and longitudes intersect and form an imaginary grid on Earth. Longitudes meet at the two poles and range from 0° (Greenwich meridian) to 180° (Antimeridian), going east and west. Here are a few views of these imaginary lines using Google Earth. Click on the image to see a larger version.

That’s what it should be. But it isn’t. Why?  Well, if we followed that rule, a small part of eastern Russia would have a different date – if the date to west of the line were 1 January 2023, to the east of the line the date would be 31 December 2022!

Russia would have two different dates! (see map below).

So, individual countries have decided to redraw the IDL away from the Antimeridian.

Longitudes converge at the poles. Here you see the Greenwich meridian (0° longitude) and the Antimeridian (180° longitude) are opposite to each other.  Click on the image to view larger size.

Whichever country is the first on the west of the IDL, gets to greet the new year first!

A lot of people traveled to small Pacific Ocean islands in December 1999 to be the first ones to greet the year 2000. Which island country was the first?

In 1995 Kiribati moved the IDL to keep the whole country on the same day at the same time. Before then, the western part of Kiribati (where its capital Tarawa is located) was 22 hours ahead the eastern portion of the country because of the IDL!

The Antimeridian.  Click on the image to see a larger version.

Again, look at the map below and you will see how Kiribati is affected by the Antimeridian and the redrawn IDL.

Then which place in India will be the first to greet 2023?

Well, going by longitude alone, it should be the place where the borders of Arunachal Pradesh, China, and Myanmar meet. But India has adopted the same time for the whole country, the Indian Standard Time (IST). So, wherever you are in India, you can say Happy New Year at the same moment!

Look up the countries along the IDL in your atlas. Find out which country or place will be the last one that gets to greet 2023.

Be sure to include

Featured image : Version of this blog as it appeared in The Hindu’s Young World supplement on Tuesday, 29 December 2009, on page 3.