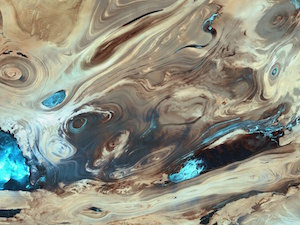 Today, another listicle (an article consisting of a list with details); your next internet exploration of geography connections will ‘take you places.’ Check these out.

When we try to represent the 3-D globe Earth on a flat (2-D) surface, we end up losing a lot of accuracy. There is no map that is perfectly true. Here is an interesting article about the misrepresentation of Africa on Google Maps. It is all a question of which projection is used. Projection is a very complex mathematical method of representing Earth (3-D) on a map (2-D). The shapes of the landmasses on the map depend on which particular projection is used. This article gives you a good insight into the concept of projections and why they matter. It is very well-illustrated.

In most parts of Bangalore, this is still a shout you hear; vegetable vendors announcing their presence so you can buy veggies from them. We ask the prices. Perhaps we haggle with them. We want half kilo of this, no not that one, it’s too small, this one looks too ripe, … But we rarely, if ever, think about where these veggies come from. That geography question remains unasked, unexplored. (I often also ask the vendor where he/she is from. There are interesting geographical patterns to the answers.) Recently this article explored the question of where Bangalore’s vegetables come from.

Except perhaps in the odd geography textbook, the word tsunami was not part of our consciousness or our vocabulary. The 2004 December tsunami changed that. The cost to life and livelihoods was enormous. Now, everyone is aware of the word, though not necessarily what it refers to. Two other points: the “t” in tsuname is pronounced and it is not a natural disaster – it is a high-energy Earth event. Since that tsunami struck most geography and EVS textbooks have a chapter on “natural disaster management”! That is a wrong title and the concept is wrong. You cannot manage a natural disaster, you can manage our preparedness and response to it. With these in mind, check this one out.

When I was in school, hundreds of years ago, we had a few lines in one of our geography chapters about the shape of Earth. It is round. How do we know this? Well, there would be a crude line diagram of a ship sailing off the horizon; a statement that when you fly in the sky, you see Earth curving; and astronauts have see it from space and they are emphatic that Earth is round. It was one of NASA’s Apollo missions that gave us that now-iconic photograph of The Blue Marble. Subsequent space missions have given us spectacular photographic evidence of Earth’s globular shape.

Now we take it for granted that Earth is round and textbooks are focused on making you memorize other stuff!

But there are some die-hards who persist in claiming that Earth is flat. “Surely, they are joking!”, I hear you say. Are they? Find out.

It is generally estimated that most of Earth’s water has come from within itself and that this happened around 3.4 billion years ago. It is also believed that comets may have brought some water to Earth. I often tease students (usually class 6 or 7 students) about the age of water. For example: most of the human body is made of water. At least one molecule of water in your body must be 3.4 billion years old. So, next time when you fill out a form, where it asks your age, write 3.4 billion. Then, I tell them that dinosaurs lived on Earth after 3.4 billion years ago and some 65 million years ago before us. They drank a lot of water, those huge fellows. What happened to all that water they drank? Usually, the kids think about this for a minute or two and several of them figure it out and start making “yuck! Thhooooo! Blyeaaaaah” sounds. Good fun with learning! But there is something else interesting that scientists have recently found out.

It is now undisputed fact that human activity is driving global warming and that, in turn, is leading to drastic climate changes. Remember that “climate” is an average of “weather” conditions. Therefore, even though we may have odd weather patterns where there is more cooling than heating, the larger picture shows a very disturbing trend. But not all of this is “bad” or “inconvenient.” Here is a good source of up-to-date information on climate change topics.

Nature is a wonderful artist. This should be the part of all geography education. How marvelous is this whole set up that so delicately balances power, energy, and size with breath-taking beauty. Whenever I see these things, I feel so insignificant in the scale of things. I also feel grand because I am part of the amazing, large system. At the same time. Look at these images from NASA and the European Space Agency satellites and marvel at Earth as Art.  Keep an atlas handy and find these places mentioned in this set, so you can see their locations in context.

Inputs of fresh water (for cooking, irrigation, washing, drinking) and ejection of used water (agricultural waste water, sewage) are crucial for human societies to survive and thrive. If freshwater supply is threatened or diminished, the consequences can be dire indeed. How do we cope with this? Here are two reports of a very positive story of a village in Maharashtra’s leeward side where villagers took charge of their own destinies by collective action to revive the hydrography of their village.

A version of this article appears in the Deccan Herald Student Edition in November 2015.