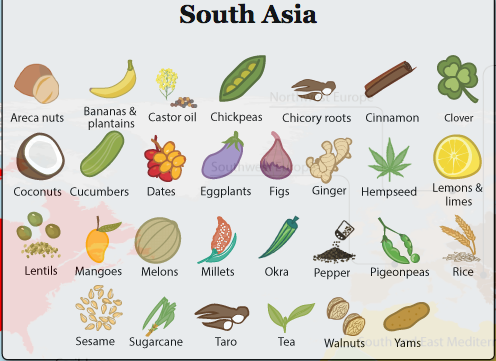 A cautionary tale from the USA – an HIV crisis mapped. Then, a set of interesting maps of the London ‘tube’ trains (or the ‘underground’). Ending with a map of where our foods come from. These are on today’s special menu at the Geography Darshini!

HIV (Human Immuno-deficiency Virus) is a deadly virus that attacks the human immune system. This makes the infected person’s body vulnerable to many diseases which the immune system is unable to fight off. When this happens, the HIV+ (‘HIV-positive’) person is said to have AIDS (Acquired Immuno Deficiency Syndrome). These days, an HIV+ person does not necessarily develop AIDS due to advances in medical sciences. But when a person does develop AIDS, even a common cold could be dangerous.

Like all communicable diseases, and disease-causing organisms, AIDS and HIV, too, have a geographical pattern. What started as an epidemic in Central Africa, eventually became a pandemic (remember those words?).

In the case of every epidemic and pandemic, place matters! A lot! Hence, it is important to understand the spatial patterns of pandemic diseases. Incidentally, spatial (pronounced SPAY-shiyal) is derived from space – the geographical space on Earth, not interstellar space.

In the early 1980s when AIDS hit the USA, geographers immediately got to work and described the spatial patterns of the disease and why place is important to understand and tackle the disease. Like every pandemic, HIV and AIDS challenged the world’s human values and responses to it. These responses also had interesting geographical patterns. I’ll discuss this some other time.

Now, there are reports from the Center for Diseases Control (CDC) that rural counties (a county is rather like our taluk) that have certain characteristics are increasingly vulnerable to outbreaks of HIV, the virus that causes AIDS.

These characteristics include poverty, fatal overdoses of certain narcotic drugs, and the sale of prescription opioid (derived from opium, the product of the poppy plant) drugs. Ultimately, the counties are fundamentally suffering from poverty and drug trafficking. These drugs lead to behaviors that make people vulnerable to contracting HIV. This is leading to a potential renewed pandemic. Read this article at  and a set of maps that also includes an animated map showing how the crisis has spread from 1999 to 2014.

Drug overdose deaths per 100,000 population, by county, USA. Click on the image to go to the interactive map. (Source: http://bit.ly/2c1E3ws)

So, poverty alleviation and anti-drug campaigns to educate people and take them off the deadly habits are key to tackling the situation. And all this requires a good geographical understanding. And a study of maps and the information underlying them are vital.

The ‘tube’ is the underground train system in London. Its underground tunnels and stations have been part of historical times (for example: as underground shelters for people when Nazi Germany bombed Britain during World War II). It is also part of great fiction (for example: Sherlock Holmes).

Maps of urban trains, whether they are above or below the ground, are interesting in their own ways. They show positions and directions, but are generally not to scale nor true to shape.

The basic map shows places and their sequence on each of the lines. Simple and enough for you to know where to get on, get off, or change trains.

But imaginative people have always played with these maps. They may or may not be useful, but they sure are intriguing and creative. Take a look at these interesting maps of the London tube: healthy map (how many calories you would burn if you walked from station to the next – view a large image of the map);  an interesting animated map showing ‘A visualisation of 562,145 journeys on the London

A day in the life of the London tube. Click on the image to go to the animation. (Source: http://bit.ly/2c1Es1U)

Underground network, from a 5% sample of … journeys during a week in 2009’; ‘This rental map of Munich is based on its subway system shows how much cheaper it is to rent in German cities than in London’; and here are two links to a map showing how many ‘walking steps’ there between any two consecutive stations on any line (overview and a large, zoom-able map).

And now, some food for (geographic) thought…

It has been a very long time since humans ate only food that was locally available. As humans migrated, colonized various areas, came into contact with cultures around the world, they also carried different kinds of grains, fruits, vegetables, and dishes with them. I have written in this column previously about produce that came to us from outside our borders. This month, on 21 September you can attend a workshop for teachers on the ‘Surprising Geography of Idlis’ at the International Geography Youth Summit!

The Consultative Group of International Agricultural Research (CGIAR) has a very interesting blog with fascinating maps and other interactives you can explore. Among them is a beautifully made interactive map of where many of the agricultural produce we consume come from.

Interactive map of the origins of some of the agricultural produce of the world. Click on the image to go to the interactive map. (Source: http://bit.ly/2c1FMSF)

After you have learned where different items came from that we now consume, you will find that the ingredients of every dish become very interesting! This is a delicious way to learn geography.

Origins and primary regions of diversity of agricultural crops. Click on the image to view large version. (Source: http://bit.ly/2cdYmKJ)

So, we have looked at different kinds of maps – some cause alarm and concern, others inform in enjoyable, fun ways. Maps are powerful means of communication.

Go ahead and visit the sites I have listed today and explore the maps – and, with them, a world of ideas!

A version of this article appears in the Deccan Herald Student Edition, 08 September 2016.