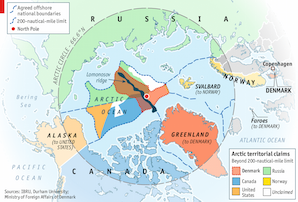 Let us begin with latitudes. Look at the globe and you will notice some of the features of latitudes. Among these features is the following: (1) latitudes are horizontal, concentric, circles stacked up in a north-south direction on Earth, and (2) as you go from the Equator towards the poles, the latitudes get smaller and smaller in size, but larger and larger in “value.” To such an extent that, when you reach the poles, the latitudes are not even circles; ninety degrees North and South are mere points! Yes, yes, I remember that these lines are all imaginary. Chill!

Talking of chill … the poles are quite chill-ed. So chilled that they are frozen solid, each is part of a large area of ice called the “polar ice cap.” The Antarctic ice sheet is about 14 million square km, and the Arctic is about 9 – 12 million sq. km. (the variation in the arctic is due to the seasonal melting and freezing). The Arctic has sea ice whereas the Antarctic is largely land ice in the eastern part and sea ice in the western part.

Among the consequences of this warming trend are the increased range of diseases (e.g. malaria) over more latitudes, changes in agriculture (e.g.: Greenland’s agricultural production is increasing, Himachal Pradesh’s apple growers are facing difficulties), rising water levels (e.g.: people in the Sunderbans are facing problems living there), and so on.

One other consequence that is happening is countries arguing over territories. This does have consequences for you and me, even if in a long and complicated way.

As the Arctic ice is shrinking, scientists tell us that it will open up sea routes that are currently solidly ice. When these sea routes open, navigation via the North Pole will be available. Why is this important and to whom?

Canada, Denmark, Iceland, Norway, Russia, and the USA are laying claims to Arctic waters. The USA has not ratified the UN Convention on the Law of the Sea and therefore cannot lay claims at the UN for this.

One part of this claim is the rich resources on the Arctic seabed. What are these resources that these countries are interested in? They are chiefly petroleum, natural gas, and fisheries.

But there is another part of this – shipping corridors. Currently navigation in the Arctic is very difficult and not very economical for large-scale international shipping. With the melting of the Arctic ice continuing, in the coming decades, there are likely to be significant corridors of liquid sea, i.e., water, through which ships can pass.

This opens up many commercial prospects for the countries bordering the Arctic Ocean. Russia is particularly interested in this because it has long sought a warm water port for its own interests. The significant coast line on the Arctic Ocean would allow Russia to expand its maritime (sea) presence.

These shipping lanes are not just of commercial value. They also open up corridors for movement of naval craft. Thus, military control over the waters of the Arctic Ocean is another very important aspect. With military control, Russia can defend the area that it has claimed as its own, and exploit the resources there. It can also expand its naval power further from its shores.

But these are true of each of the countries claiming areas of the Arctic Ocean. Each country wants the most for itself. They also share a common interest in keeping Russian claims to a minimum, and thus keeping Russia from becoming more powerful.

When those shipping corridors open up, the distances that ships have to cover to carry goods around the world would be drastically reduced. Of course, all this will depend on those corridors being peaceful – after all, if the countries now vying for control are fighting with each other, using those corridors would not be possible.

The Suez and Panamá canals are currently important precisely because the Arctic routes are iced up. Once the Arctic routes open up, the importance of the two canals is likely to be reduced. Meanwhile, what will be the importance of the huge investment that the Chinese are making to build another canal, the Nicaragua canal? Will that be a dud investment or will it still be important? We have to wait and see.

In any case, the relationships among countries will yet again undergo considerable shift. We may well see more varieties of foreign goods (including food items) coming to India, perhaps even fairly cheaply.

Meanwhile, what will happen to Santa Claus and his gifts production unit up at the North Pole?