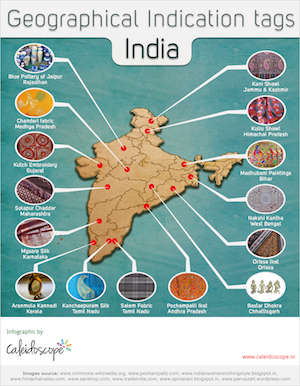 Geographical Indication Tags in India [Infographic by caleidoscope.in] (Click on image to see larger version in a new tab/window)

There may be a particular, special recipe for making an item that is special to a place. Remember: recipe (REY-si-pi) includes (1) ingredients and (2) method of preparation. That recipe, when properly applied, gives us the product we desire. Or it may be that a particular item just has long been associated with a place and is reputed to be of high quality. These are all matters of high pride for that place. However, it doesn’t stop there.

Just as we have trademarks or trade names that are protected under international and national laws, and copyright for writings / recordings etc., now there is Geographical Identification (GI). A GI tag gives a particular product a legally protected identity. To make that product and call it by that name, you have to follow the registered ‘recipe.’ (By the way, ‘recipe’ is not only for foods; even making high-grade steel has a recipe!)

So, for example, if you make Mysore paak any other way than what is registered under the GI tag, and call your produce ‘Mysore paak’, you would be violating the law. The product must also meet certain standards (for example, consistency, taste, etc.).

The World Trade Organization’s TRIPS Agreement has adopted a definition of GI as indications that identify a product as “originating in the territory of a Member, or a region or locality in that territory, where a given quality, reputation or other characteristic of the good is essentially attributable to its geographic origin.” (Source: Guru Wikipediaji Maharaj)

Having a GI tag brings focus to the place where a product is made and provides Intellectual Property Rights (IPR) to those who make it. My dear, dear friend Ms Wikipedia Rani tells me, and I quote her: “The GI tag ensures that none other than those registered as authorized users (or at least those residing inside the geographic territory) are allowed to use the popular product name.”

The Odisha rossogollas (left), from the Pahala village, are creamish and softer. The Bengali rossogollas (right) are whitish and spongy. (Source: http://bit.ly/2aeod3u)

There has recently been a bit of a controversy on whether that delicious item, rossogolla (ROSH-o-golla), is Bengali or Odiya in origin. Both states have been involved in ‘custody battle’ of sorts. The Bengali claim is that it was invented in 1868 by Śrī Nobin Chandra Das, founder of the K C Das chain of sweet shops. The controversy was stirred when Śrī Surya Narayan Rath Sharma of Puri (Odisha) claimed the rossogolla is actually of Odiya origin – Jagannātha, the presiding deity of Puri, having offered it to his consort, Lakshmī. Because of this, the sweet has been an offering at the Puri temple for centuries. (Read more).

Just on 2 August 2016, Deccan Herald reported: “From Mysore silk to Lucknow ‘chikan’ (embroidery), about hundred traditional crafts will have the Geographical Identification (GI) tag, thanks to the efforts of the Indian Institute of Technology-Kharagpur.” (Read the story here). Here is another story you might like to read.

You can find a list of over 200 GI tags assigned to products in India here. Also, check out this interesting article on GI in India.

All this GI tagging, declaration, etc. are fine. Enforcing the rules is quite another matter. In India, we see so many ‘duplicate’ products being sold and people happily buy these things based on (1) cost, (2) appearance, and (3) their perception of ‘good quality.’ The average Indian customer – and I am among them, thank you! – does not particularly seek out products that have a GI tag. The ‘duplicate’ items will be cheaper than the original. Did I say ‘cheaper’? Sorry, I meant ‘less expensive.’ These are matters of personal preference. The enforcement of IPR rules is vague at best. Why is this?

Alas, enforcement is a huge problem in India. The Indian courts are overloaded with millions of cases dating back up to decades. The course of a lawsuit in a court is very tortuous and long-drawn. This is a huge issue. If the justice system were fast in deciding cases of violation of laws, such as the GI tag laws, then people would be more alert and report violations. Those who make GI tagged products would also be careful to follow the law.

A version of this article appears in the Deccan Herald Student Edition, 04 August 2016