Up above, Down below 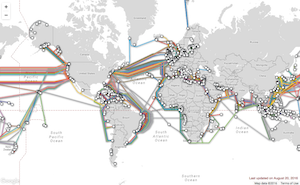 Worlds less-known, but suspected to be rich with resources. Clutter on the ocean floor. Mapping poverty on land. Geography pervades all of these because it addresses its four fundamental questions. Remember them? (1) Where is it? (2) Why is it there? (3) So what? (4) What if …?

Humans have sent satellites far out into the sky to look back on Earth and tell us what they can see. We have only recently started gaining direct understanding of what lies in the deep seas (“defined as those parts of the ocean below 200 meters”) of the world. The depths of the seas hold many things that we are only now beginning to see directly. The more we look, the more we find – especially resources that we can use.

In all this, we run into a very inconvenient fact – nature has little regard for our devices. Particularly lines! Boundaries that we draw and say, “This part is ours, that part is yours. Between the two, in the seas, it’s a free-for-all … might is right … and we’ll take all that we can.” Nature does not distribute resources according to the boundaries we draw.

Who owns the open seas? They are called “international waters.” They are like commons lands – nobody owns them, but everybody owns them. This means whoever exploits them gains. Whoever pollutes them, however, spreads the cost around – we are all affected by that pollution. Gains only for the exploiter, losses/pollution shared by everyone. The UN Convention on the Law of the Sea is one attempt to impose some order on the open seas and their use by nations.

However, technologies improve because human beings innovate. These technologies are helping us explore (and exploit) new parts of the world. The deep sea is part of this new frontier. It is the realm of

Unlike the sites where such minerals are found, the deposits underwater are closer to Earth’s crust than on land. But … There’s always a ‘but’!

Clutter on the floor

Apart from these, there is anthropogenic (quick, what does the word mean?) clutter on the ocean floor. Perhaps

the most insidious component of this clutter is non-biodegradable matter (mainly plastics) that is disintegrating in the seas and entering the food web underwater. From there, of course, it enters the terrestrial food web also. You and I are likely ingesting it in ways that we may not even realize.

Another kind of clutter is the internet! What?? The internet is at the ocean bottom? Yes, indeed. Every email you send, every WhatsApp message, every Instagram, FaceBook, and other message you send and receive travels through international cables. These cables are under water, on the ocean floor (image on left); connecting nations of the world.

And you and me.

Explore all this in these two articles: the original article and another one based on it.

With the advent of satellites, within a few decades since the first orbital launch of Sputnik, we are now able to study Earth from a very unique standpoint: “above” Earth, even from space.

Researchers from Stanford University, California, USA, have pioneered a new way of mapping poverty, using satellite technology (that page also contains a video explaining their method; be sure to watch it). They tried their method in five African nations: Nigeria, Tanzania, Uganda, Malawi and Rwanda. (Locate them on a map.)

“They started with night-time images captured as part of the U.S. Air Force Defense Meteorological Satellite Program. Places that were brighter at night were presumed to be more economically developed than places that were dim.”

On day-time images, their computer algorithm picked out anthropogenic features such as roads, buildings, farmland, and natural features such as lakes. (By the way, algorithm is ‘a set of rules for solving a problem in a finite number of steps’ – dictionary.com, which also gives us this geography for the word: ‘from Medieval Latin algorismus, a mangled transliteration of Arabic al-Khwarizmi “native of Khwarazm,” surname of the mathematician whose works introduced sophisticated mathematics to the West’.)

“The computer even learned to distinguish metal rooftops from those made of grass, thatch or mud, according to the study.” Now, you begin to see where this is heading? The type of rooftop can be an indicator of relative poverty. Likewise, the dwelling’s distance from an urban area – farther means poorer; also affecting access to primary health care, non-agricultural economic opportunities, education opportunities, etc.

These techniques are still being developed and seem to hold much promise.

So, the argument that “we should spend our money on doing things on Earth instead of on space programs” receives another blow.

A version of this article appears in the Deccan Herald Student Edition, 01 September 2016.