“I have just sent you an email. Check it and let me know what you think. I’ll stay online”, is a common part of conversation across continents these days.

Usually, in a matter of seconds the recipient is able to read that email. I often find myself saying, “It’s been ten minutes, since I sent that email! You still haven’t received it?” to someone in San Francisco.

We expect things to work. And work fast!

The internet connects most places in the world today. With real-time audio-visual technologies (e.g.: Skype, Google Hangout, iChat, and so on), time and distance have shrunk remarkably. When I teach geography to students on Skype, the communication is usually instantaneous though physically they may be far from me.

The speed with which we are able to communicate, makes the distance almost irrelevant … when the networks are working properly. Technology mitigates geography! This facilitates greater spatial interaction (how places interact with each other), a concept I have introduced in an earlier article.

Thanks to the internet, international bank transactions can occur within a matter of seconds or minutes as opposed to the very complex and stressful method a paper transaction would take.

Now, I get on Skype and pay a pittance to chat with most of my contacts worldwide!

How are these connections achieved?

We are able to communicate so easily with so many places in the world thanks to underwater cables that connect places. These cables were first laid to connect the continents with telegraphy. Most of you probably have not seen a telegram! It was phased out in India a few years ago.

Now cables provide us with the ability to connect on the internet and, that too, at high speeds. The communication is almost instantaneous.

Here is a diagram of the internal structure of the cables:

Check out the very interesting interactive map of the internet cables snaking around the world and connecting us. (Click on the image to open the map; it will open in a new tab/window.) 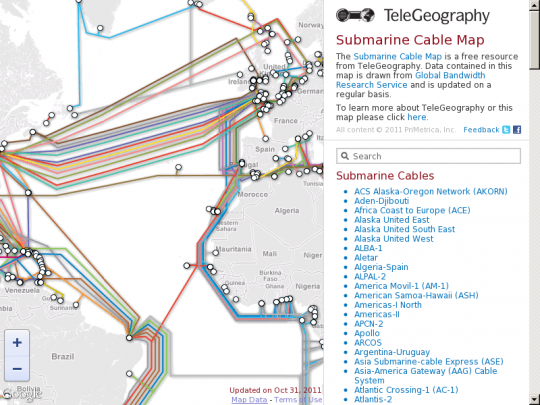 Among the many uses of the internet, international security is crucial. Internet communication is key not only to people’s interactions but also for very large financial transactions, diplomacy, military operations and strategy, espionage, and so many others.

Communication is vital. The kind of instant communication that the internet provides is especially crucial for military and diplomatic coordination among allied countries. It is also vital for sharing of intelligence among countries (espionage secrets, latest goings on in allied or rival countries, the movement of international criminal commodities such as narcotics, etc.).

The underwater cables in the open seas are in “international waters” – no one controls these areas; they are areas of a lot of conflict. Two kinds of enemies pose serious threat to these cables:

There are at least two kinds of threats:

All threats target international military, intelligence, financial, and other forms of security.

Russia has often been portrayed as a big bear – aggressive, strong, and violent. This was true during the decades when the USSR (Union of Soviet Socialist Republics) existed also. The western countries used this image in their anti-USSR propaganda to fight the USSR.

Some people still see Russia, the biggest remnant of the USSR, as a bear. In recent times, Russia and NATO (North Atlantic Treaty Organization – an alliance of several western European countries and USA) have been having bad relations. Each sees the other as a threat to peace, safety, and security in Europe (and elsewhere).

Russia is accused of interfering in the elections of several countries using internet platforms such as FaceBook and Twitter. More and more evidence is being presented to prove this. For example, the national elections in the USA in 2016 are said to have been tampered by Russia in this way. This is a huge deal!

Countries have commonly interfered in the internal affairs of other countries for centuries. The internet is making this easier and more insidious.

In the past week or so, news stories have emerged claiming that Russian naval vessels (ships and submarines) are loitering around the areas where international cables are located. (See here, here, and here; links open in new tab/window.)  Countries such as the UK have expressed concern over this development because any cutting of cables connecting Europe to the USA (and North America in general) could have extremely dangerous consequences for NATO’s military capabilities. This could make NATO (especially western European countries) vulnerable to Russian military (and other) threats.