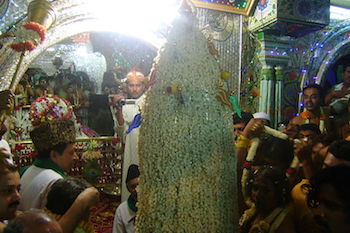 Syncretism is “the attempted reconciliation or union of different or opposing principles, practices, or parties, as in philosophy or religion.” (dictionary.com). In my life, several gurus have taught me the importance of syncretism; chief among them were my amma and my geography guru (Dr. Surinder Mohan Bhardwaj). What are syncretic geographies and why are they important?

Every Hindu household has a shrine of some sort – in a pūjā room or in one part of the kitchen. (“Why in the kitchen?”, is a geography question. Find the answer!) During my childhood and early adult years, the shrine at home was one shelf in the small kitchen we had. Everyone in the family had their own ishta-devataa (beloved deity). For one it was Hanuman, for another it was Shiva, and so on.

As the keeper of the shrine, amma made sure that images of all our diverse ishta devatās were accommodated there. She used to tell me, “Different people have different ways of worshiping, we must respect them.”

So it was that someone got her a small statue of Mother Mary with the Christ Child. This, too, was added to the shrine. Every Sunday, along with the regular deepas, she also lit a pair of candles. That small space, accommodating so much, also saw another interesting phenomenon.

Within that space, on Tuesday and Friday, the icons of Devi would be made the centre-pieces of worship; Thursdays would be Vishnu, Raghavendra, and the Guru; Mondays would be for Shiva; and so on. In that small shrine was a worldview that reconciled diverse forms of faith – none was excluded, instead all was included with respect and love.

As I grew into a geographer under my guru’s tutelage, I used to revisit that shrine in my mind and rediscover its many geographies. I found that I had grown up with all that Dr. Bhardwaj was teaching me in our many conversations! “I traveled far and wide and, in the end, all I did was come home.”, as someone once said.

During one of my visits home, I told my niece about all this and remarked to her that the only thing missing in the shrine was something Islamic. She promptly went and got a small sticker with an inscription from the Qur’an (with the help of a Muslim friend) and gave it to amma. She, in turn, pasted it on the wall in the shrine. Several times a week, the entire shrine would be cleaned – the sticker was gently wiped with a moist cloth.

The Bengaluru Karaga is a very important folk festival of the Thigala community. They were once the horticulture experts and played a very important role in the production and supply of horticultural products in Bengaluru. For one night, a man from the community assumes the role of Draupadi, dresses as a woman, and carries a stack of highly decorated pots on his head. Carrying these, he starts from the Dharmaraya Temple and traces a route that takes him past many houses and other places.

One of the important stops on the route is the Dargah-e-Shariff of Hazrat Takwal Mastan Shah, an 18th century Muslim saint. As with all sacred places, there is a sthala-purāna (place-legend) about this association of the Karaga (a Hindu festival) with the Dargah (a Muslim shrine).

The festival, the procession, the route of the procession, the rituals at the Dargah – all foster communal and religious relationships in geographic space. Why is this important? Religious practices vary widely within and among people of different faiths. Such acts as the Karaga help connect the people in a common, shared ritual. This helps bring about better relationships among people who, after all, are sharing geographic space.

The Infant Jesus Church in Neelasandra, Bengaluru is another interesting example. This shrine is of very recent origin. It is a place of weekly pilgrimage for the faithful of many diverse religions. I personally

know several people, of different faiths, who are ardent pilgrims to the shrine. The crowds have grown enormously over the years. The special day for this ishta-devatā is Thursday. (Yes, amma prayed to this devatā also at her shrine.) Thursday is also the special day for the Guru (Thursday = Guru-vāra); people I know visit the Church, a Raghavendra Svami temple, and a Sai Baba temple on Thursdays.

In the Divine, we seek resolution of what is otherwise a bewildering variety of life. This seeking happens in geographic space in the form of pilgrimage. Pilgrimage is “an outward enactment of an inward journey.”

We write on the landscape and we read it back. In these cases, the journey is to find the unity underlying the diversity.

That resolution is syncretism in action.

As Citizen Geographers, you can use these kinds of pilgrimages to promote the idea of geography in the cause of peace. My guru does it, too!

A version of this article appears in the Deccan Herald Student Edition, 17 November 2016