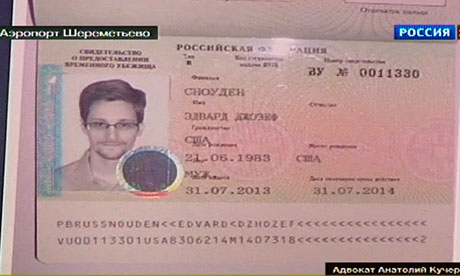 What do borders mean in this, The Age of the Internet? Borders are not just lines on a map or a barbed wire fence on the ground. Here’s a story of signals, territorial geography, and a whistleblower’s journey with his luggage of secrets.

You’ll have heard of Edward Snowden, an American citizen.

He gave an interview to Glen Greenwald, a reporter for the Guardian newspaper on 5 June 2013. He was in Hong Kong. The newspaper is based in London. The interviewer is based in Rio de Janeiro, Brazil. The story was about the USA.

And the rest of the world, too.  How’s that for a geographic olio?

The National Security Agency of the USA was set up in its current form in the early 1950s to coordinate the intelligence-gathering operations of the Department of State (= External Affairs Ministry), Central Intelligence Agency, and Federal Bureau of Investigation. Over the years, the NSA gathered intelligence in signal form (email, satellite and cellular phones, internet chat, landlines, etc.) from all over the world. It analyzed these to look for information leading to hostile agents and agencies such as terrorists.

Others say that this isn’t all that it’s being used for. It’s also used to identify groups and people that USA and its allies do not like; e.g.: civil disobedience groups, anti-government protestors.

Snowden says that USA even spied on its own people, and its own allies! It also helped allies to spy on their own people. Illegally.

What a can of worms he opened up!

Snowden worked for a company contracted to carry out electronic spying operations for NSA. He secretly copied a huge volume of secret files on to his own personal laptops. With these he flew from Hawai’i, where he was stationed, to Hong Kong.

Talking to Glenn Greenwald (journalist) in a hotel room in Hong Kong, he mentioned that he may seek asylum in that country, a move many criticized as unwise. Then he mentioned Iceland as a possible destination where he would seek asylum.

The US government declared him a fugitive and demanded Hong Kong (which is in fact under Chinese control, though it is called an autonomous region) return Snowden to the USA. Hong Kong didn’t – saying that the USA didn’t provide proper documents.

Snowden left Hong Kong for Moscow even as the USA revoked his passport. Without a passport, you are not allowed to travel internationally because you are deemed to be  stateless. (Except if you are seeking asylum – how ironic in this story!) Thus, he reached Moscow but was stuck in the international passengers’ transit area. He was in Russia, but in a sort of international area!

If he left the airport, he’d be on Russian soil. He can’t do that unless he has a passport (sorry, he doesn’t) or has asylum in Russia (protection from being taken away by external agencies).

Bolivian president Evo Morales was in Moscow at the time and headed back to Bolivia in his official plane.

Several European countries refused permission to allow the Presidential plane to enter their air space for refueling. They said Snowden was aboard going to Bolivia. It was forced to land in Vienna. (Air space: the air over a country and any area under its control, stretching all the way to the end of the atmosphere.)

The Spanish ambassador to Austria, Alberto Carnero, arrived at the Vienna airport demanding to search the president’s plane, causing an international furor.

Latin American leaders joined Evo Morales in condemning the diversion of his plane as act of international hijacking. The plane is international territory in itself because it was carrying the head of a national Government and enjoys diplomatic immunity.

If Snowden entered the Bolivian embassy in Moscow, he would technically be in Bolivia though on Russian soil. Embassies are technically territories of the countries they represent – a very complex geographic situation.

Snowden applied for asylum in Russia and was been granted a one-year stay on Russian soil. Having left the airport, he has been taken to a secret location. The USA is mightily miffed about all this and has said it is “extremely disappointed” and U.S. Senator John McCain (Republican presidential candidate in 2008, representing Arizona) said, “Russia’s action today is a disgrace and a deliberate effort to embarrass the United States. It is a slap in the face of all Americans. Now is the time to fundamentally rethink our relationship with Putin’s Russia.” “Extremely disappointed” is a very strong language in diplomacy!

Here are three articles in The Guardian about this part of the story, arranged from the earliest to the latest:

Look at all the borders involved in this story and the ways in which they have been crossed (or “violated”), depending on your viewpoint.

Now, if any of the South American countries offers asylum, how will Snowden get there? Which way can he go so that he does not get into trouble? He has to fly. But the great geography question is what will be his route? Here are five options that Max Fisher offers in the Washington Post. (It has interesting maps for you to consider.)

Max Fisher’s options for Snowden to get to Venezuela. [Source: Washington Post] Click on the image to open a larger version in a new tab.

Why should we care about this? Every email, SMS, mobile, landline, and other communication is being monitored. Can we do anything about it? It certainly affects all of us. Should we be ‘worried’ about it? If yes, why? If not, why not?

Some people say, “I have nothing to hide, so I don’t care.” What do you think of this attitude?

Downloadable worksheets for you:

Watch CitizenFour, a documentary about the Snowden saga. Also, try to find out the latest information on the issues he raised and his own life.

[A version of this article appeared in Deccan Herald Student Edition on 12 August 2013 page 1.]