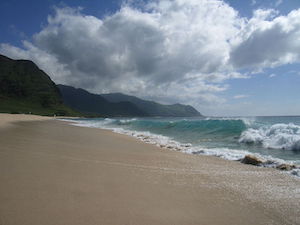 There are far more ways in which this interaction occurs and is reinforced in our psyches. Today, I look at some of my favorite examples of this. Can you add any examples? If yes, share them in the comments section below.

Sant Tukdoji maharaj (1909-1968) has written many important works. I have heard and learned his one song that captivates me enormously in different ways. One of the ways is the spiritual reading he does of the water cycle. We all study and answer those dreadful exam questions about this cycle. There is so much more to it that we don’t even consider.

That song is har desh mein tu where he evokes the water cycle and the forms of the water in it. In it, he sees a spiritual metaphor (or symbol):

Rising from the ocean as a cloud,
You pour down as rain
Becoming a gentle stream or a gushing river,
You are the same “One” in different forms.

In those lines, he beautifully describes the basic water cycle of the tropics (why only the tropics?). The forms are different, but it is all water in essence.

Bankim Chandra Chattopadhyay’s lovely 1882 poem, vande mataram is another of my favorites. The first two stanzas of this poem form the national song (different from anthem) of India.

Mother, I bow to thee!
Rich with thy hurrying streams,
bright with orchard gleams,
Cool with thy winds of delight,
Dark fields waving Mother of might,
Mother free.

Look at how beautifully the poem evokes geography. What is interesting in this is that it is not just about a country or nation (India), it is about Earth as a whole. (Although this video applies it only to India.) This is very appealing to me because it looks at Earth, and life on it, as a large system; not as partitioned into small pieces by boundaries.

In most Hindu traditions, the environment is seen as divine. These traditions are one way of finding the links between this system and its folk roots. (I have described “folk” in an earlier column.) Despite this tradition, today, we pollute and abuse the environment in myriad ways!

Nature, Earth, the environment being divine, humans can pray for favorable conditions. When such prayer is on behalf of others, we call it intercessionary prayer (compare this with votive prayer described in an earlier article). Such prayer not only comes from the link between humans and the environment that is controlled by the Divine, it also reinforces that link.

Sri Muttusvāmi Dīkshita (1775-1835) is a composer of what is called Karnataka sangīta. He is of particular interest to me as a geographer because he went on many pilgrimages and composed songs on the deities in each place. In these songs, he provides interesting physical, historical, mythological, and other geographical references.

Probably around the turn of the 18th century, on a journey to locate his brother, he happened to stay in a place called Sāttūr in Tamil Nadu. This is part of a semi-arid area (Quick: Define this term! Why is that area semi-arid?). When he camped there, the area was in the grip of a drought. People were suffering. Hearing that some ‘holy man’ was in the area, so the story goes, people came to him and asked him to pray for rain for them (intercessionary prayer). He is said to have composed a song in the rāga called amrtavarshinī (she who rains amrta, ambrosia), addressing the local deity called Bhavānī. (Notice the geographical point of the deity being local.) He ended his song repeating a prayer: varshaya, varshaya, varshaya meaning make it rain, make it rain, make it rain! Legend has it that it rained soon after, and the drought was alleviated.

This is legend. But the geography in it is fascinating.

There is also the story of Tānsen’s ability to bring rain by singing the rāga megh-malhār.

These are just a few examples of how the human-environment interaction theme of geography has been expressed in Indian culture.

To me, they also show that subject boundaries (geography, language, science, etc.) are temporarily useful for us to organize our school day or work in a professional capacity where we focus on specific areas of study. The deeper you delve into any discipline you find that its boundaries just vanish. Life – the world – is not organized along disciplinary lines. It’s all an organic whole. We devise boundaries for temporary convenience but we should never become too attached to them.

Exploring a world of ideas requires us to start with some boundaries. However, as quickly and as early as possible, we must see them for what they are: artificial!

The spiritual and the geographical are one, not separate.