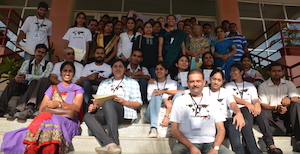 Secondary school. Primary and secondary research in geography. Professional presentation at a geography conference. These two did it. Can you? Of course, you can. You get your chance in September 2016.

Two high school students did this and we got to see the results of their research at the National Geography Youth Summit – 2014, where teachers, students from high school and above, professional geographers, and several parents also engaged with geography as a discipline.

1. Where is something?
2. Why is it there?
3. What is the consequence of that?
4. What if something changes?

You can apply this to anything you want to study in this world and get the geographic perspective. For this, you have to take what you learn from the textbook, add a lot more to it, go out, and apply it to whatever you wish to study and understand. This is crucial if you are to really understand the power of geography. Once you do this, you will start discovering (or even re-discovering) many of your aptitudes and you will be better able to answer for yourself the question, “ What kind of career can I have if I become a geographer?”

These two students conducted geographic research; they have used the four questions above to guide their exploration.

Isheeta Singh (then in class 12, Delhi Public School, Jodhpur) presented the results of her study on the differences between the past and the present of the ‘Great Indian Desert.’ She said that the dominant changes in the area had included changes in agricultural patterns, the leveling of sand dunes, and de-desertification, resulting in a decrease in the area spanned by the desert.

She found that agricultural changes included increased levels of legume growth, resulting in nitrogen fixation in the soil; a situation much more suitable for the growth of other crops. Additionally, in spite of the employment of techniques such as crop rotation, the introduction of many new crops was shown to result in “over-utilisation of soil resources”. Ensuring that water use was sourced chiefly from canals resulted in increased groundwater levels. She called these ‘Human-induced Changes.’

She suggested that these changes have an impact on climate change also, with rainfall levels increasing following a shift in the cropping pattern.

Isheeta noted that people have now settled in areas that were once inhospitable, farming crops that consume more water than the ‘hardy’ crops that were previously prevalent. The ecosystem in the desert had been altered by the presence of an invasive alien species, which had managed to establish its presence due to changes in land use, changes in climate, and changes in rainfall.

Isheeta’s research was based on studying different reports from those who had gone out and studied various aspects of the topic. Thus, her research was a form of secondary research.

“Impacts of Tourism on Ajanta and Ellora”

Unlike Isheeta’s study, this report was based on primary research; research that the person actually conducted in person. Raghav Jalan (then in class 11 at Mallya Aditi International School, Bangalore) conducted this research project for his geography class. Here is Raghav’s introduction to his paper:

“Tourism is a motion which has been carried out by the human race for a substantially long amount of time. The World Tourism Organization defines tourism as the activities of persons traveling to and staying in places outside their usual environment for not more than one consecutive year for leisure, business and other purposes.

For his study, Raghav visited Ajanta and Ellora where he studied the tourism landscape and interviewed a variety of people – tourists, officials, vendors, guides, etc. For these, he created questionnaires and analyzed the responses he received.

He concluded his paper with a list of positive and negative impacts of tourism. One example of positive impact: “Most local residents have realised that the funding towards tourism does not only cater to tourists but the amenities, facilities and the increased functions of the tourist centre may also be beneficial to themselves as they could gain access to such amenities in the local area. Many such facilities include more comfortable and frequent train, bus, as well as plane travel connections.”

One negative impact: “The amount of pollution around the caves is well restricted however the amount of traffic and congestion is increasing. This is due to a sudden increase in the number of vehicles. I talked to a cleaner at Ellora caves who said that tourist are not educated enough about the cleanliness.”

Call for you to participate!

If you want to conduct a geography research project, let us know.

You could present that research project at the International Geography Youth Summit to be held in Bangalore in September 2016. (Details will be announced soon)

Meanwhile, you can read Raghav Jalan’s full paper online here (PDF). (Link opens in a new window/tab) This can give you some idea of the kind of research you can do, how to write a formal paper about it, and so on.

Isheeta Singh’s poster presentation can give you an idea of how to present a formal poster of your research work.

Think of geography topics you would like to do research on and let us know by sending a message or commenting in the space below.

A version of this post appears in the Deccan Herald Student Edition in January 2016.