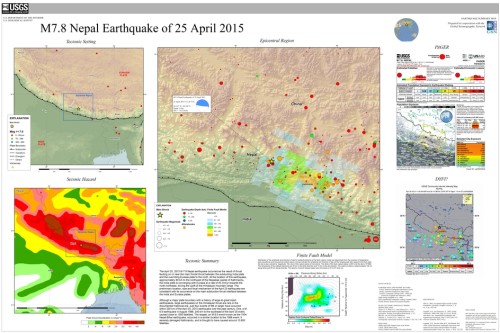 Ultimately, all matter is energy! You and I, the air we breathe, the water we imbibe, the land on which we live … everything.

Earth is a huge ball of energy. Over 4 billion years ago, as the various masses of matter began to cool and coalesce (“ko-a-LESS”, from the Latin co meaning ‘with’ and alere ‘to nourish, to make grow’), it was also spinning. It still is. That energy leads to release of all manner of other energies. The heat and pressure at the core leads to a viscous (gooey) hot mantle, whose surface is cooler (having lost its heat outward) and forms the crust on which we live.

The crust is made up of many plates. Parts of the plates are above water – this is the part on which we live. Other parts are below water in the oceans and seas. This means the seashore is not the end of the plate, it continues under the water. For millions of years these plates have been moving around. In some places the plates collide. In some places they slip past each other while keeping full contact. In other places, the plates are being torn apart.

The surface on which we stand seems solid, unbending, and strong. But don’t let appearances fool you. If only you paid attention to what is going on under your feet, you would likely freak out! But if you calm yourself and try to understand connections, you would be amazed at the magnificent scale (here is that geography concept again!) of things.

Further north of the Himalaya, the land is a plateau and is being pushed higher and higher by the plate collision – hence Tibet’s altitude is high, earning it the nickname “Roof of the World.”

As the subduction goes on, there is a lot of pressure building up where the plates are rubbing against each other. You can push and push for only so long before something has to yield! When that yielding happens, the pent up energy is released. This causes the land above to shake violently.

Many adjustments happen on the surface and below ground. The point on the surface directly above underground earthquake is called the epicentre. That is where a lot of violent change can occur, because of the shaking.

This is what happened in Nepal, about 80km northwest of Katmandu, on 25 April 2015. If you examine a map of the area, you will find that most of the fatalities and destruction happened in Kathmandu, though it is 80km away. Tremors were felt over a large area including some parts of India.

Though it is highly earthquake prone – this has been known for decades – there were no earthquake preparedness in Nepal as a whole. The Nepalese government’s response to the devastation has been very weak. International aid has been pouring in.

One of the problems that aid workers faced was the lack of detailed maps of the country – especially rural areas. This geographical knowledge is vital in planning and effective delivery of aid. If we don’t know where people are, how do we go there to help them? An international community of map enthusiasts got to work in different parts of the world and collectively put together maps of Nepal showing details of settlements, roads, terrain, etc. Close to home, a young geographer at Mysore University – Dhritiraj Sengupta, himself a native of the earthquake-prone Assam – added several maps to this effort. These maps were shared online and have been helping aid workers deliver assistance to people more effectively.

Your textbook probably talks about “natural disasters” – there is probably even a chapter on it with a title like “natural disaster management.” Here is where language is very important. First of all, there are no “disasters” in nature. Nature’s processes just happen according to the known laws of physics and thermodynamics. The disaster is when human beings lose lives and livelihoods. Why do we live in areas that are prone to such dangers – floods, earthquakes, volcanoes, sink holes, typhoons, and so on?

When we live there, we are swept away in the huge release of energy. You cannot manage a natural “disaster” any more than you can herd kittens! What you can manage is the response to the aftermath of a high-energy-release event. It is in that response that political boundaries are transcended (from the Latin trans, beyond and scandere climb, mount; hence ‘to go beyond, to surmount’) and we respond with care and concern for those affected.

I remember a voice-over in a documentary I saw some years ago: “Nature has neither mercy, nor remorse.”

A version of this article appears in the Deccan Herald, Student Edition, on 25 June 2015.