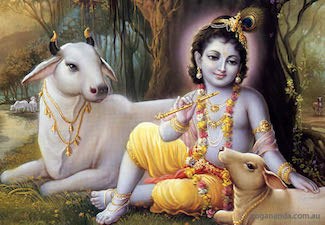 Hindu iconography of Krshna (I prefer this spelling) shows him with a vamshi – a short flute. What geography connections do I find with this?

Let us start with a production system – pastoralism mixed with at least localized nomadism. Pastoralism involves livestock rearing as an important component; owning herds of livestock. In the case of Krshna’s clan, we learn that cattle were the mainstay, particularly cows.

In a pastoral system, the livestock are capital assets – they are to be protected; people live off of the interest that that capital produces. All this, to establish the importance of cows to the economy that Krshna lived in.

Grazing livestock is an important activity in such a system. This entails herding the animals to areas of fresh fodder and water. In entirely nomadic systems this herding could involve movement over large areas of land, over long periods of time; for example, in semi-arid and arid areas.

In the case of the cows that Krshna and his clan herded, the movement was till the cows came home! (Bad pun, I know!) But true.

The cows came back to the village at dusk, giving us the Samskrtam term go-dhuuli samayam (the time of the dust kicked up by cows).

In the absence of WhatsApp, Instagram, FaceBook, and such, what do you do when you are out grazing livestock – cows, in this instance?

Well, a lot of things. Among them, music! No MP3, of course. You could lug a veenaa or sitar or whatever stringed instrument was popular at the time. Problem? Size, shape, weight – not convenient. Even if you could lug it around, there is another problem: the effect that ambient atmospheric conditions of the moment (quick: is this weather or climate?). Depending where you were and when you were there, you would have to spend time tuning the instrument.

Most percussion instruments would also have these problems.

What Krshna and his ilk – the world over – needed was an instrument that was easy to carry, did not require complicated tuning, and could therefore be played wherever and whenever desired. Even sitting in the branches of a tree (you will have seen such depictions, no doubt).

Enter a hollow tube of wood with some judiciously punched holes in it. Also enter physics – vibrating air columns. When these air columns are manipulated, we get sounds with various patterns: we call these sounds music. I feel that the depiction of Krshna with a vamśī (short flute) is more in tune (oh, another bad pun! I am sorry!) with the geography of the production system in which he participated.

Iconography of Krshna with cows and the vamśī. (Image courtesy: yogananda.com.au)

There are other depictions of Krshna showing him with the longer flute, the bānsurī. I feel the bānsurī would have been a little cumbersome and therefore probably less likely. However, depictions of such figures vary from time to time and place to place. So, any kind of flute would probably be acceptable now. (Not to me, though.)

Around this geo-sensitive and geo-sensible musical instrument, many tales have been woven, many visual and performance art pieces produced, and many genres of literature have been written. All of these forms would become very different if you took away the geographical aspect of Krshna’s flute.

In classical music, religious poetry, and in popular culture Krshna’s association with the flute is very explicitly connected to geography. We can easily see this if we look at all this through the optic of geography (and physics, too). Given this kind of geographical connection with the flute, it is easy to see its early importance as a folk instrument. Geographically speaking, folk culture is generally localized to a small geographical area.

In early times, when communications among settlements may not have been as extensive as now, it is quite possible that the music (and other cultural elements) remained largely the specialties of their respective areas. Each area would have had its own particular mix of instruments, music, and so on.

It is interesting to me that the flute is so geographically widespread. Was it invented (or discovered) in different cultures, in different places, independently in some long-ago period?

Regardless, it is now an instrumental part (ayyo! Yet another bad pun! I promise this is the last one in this essay!) of classical music in many systems, including the Indian system. The Indian system includes the Hindustani and “Karnatic” systems. (However, Dr Balamuralikrishna, the renowned musician, argued that there is no distinct and separate “Karnatic” music; there is only “world music”, he always said.)

Here are some online recordings of flute music that you might enjoy (notice the variety of sounds produced):

Suleiman – a young flautist (not flutist) playing a pahadi dhun (pahadi comes from pahad, a geographical feature: hill).  If it makes you feel like dancing, you understand its allure.

A version of this article appeared in the Deccan Herald Student Edition, 10 November 2016.