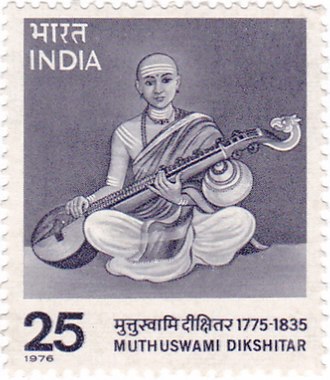 Śrī Muttusvāmi Dīkshitar (24 March 1775 – 21 October 1835) was born into a Tamizh (Tamil) brahmin family, in Tiruvārūr, in present-day Tiruvārūr district, in the southern Indian state of Tamil Nadu. His parents were Ramasvāmi Dīkshitar (father) and Subbammāl (mother).

His parents named him Muttusvāmi after the deity Muttukumārasvāmi whose temple is in Vaittīsvarankoil nearby to Tiruvārūr. They had prayed to the deity for a child. When the child was born, they gave him that name in honor of the deity. They considered their child to be the deity’s boon.

His family was very illustrious. On his father’s side his forefathers, beginning with his father himself, were excellent scholars in Samskrtam, sacred literature (the vedas, shastras, epics, puranas, etc.), music, and musicology.  There does not seem to be any information on the maternal side of the family beyond the name of his mother.

The young Muttusvāmi went on three journeys that helped shape him as a cultural geographer:

Of course, at the time, there was no such discipline as cultural geography (“… study of the relationship between culture and place“), nor did our young prodigy set out to be a cultural geographer. His work ended up with a lot of features that cultural geographers can today look at and appreciate, which is what this whole project is about.

A zamindar and family friend, Venkatakrishna Mudaliyar, took young Muttusvāmi and his brother Bālusvāmi (sometimes spelled Bālasvāmi) to Manali, near Madras (now Chennai). There they were both exposed to western band music and the violin. Bālusvāmi learned to play the violin and adapted its use to play karnātaka sangītam. Both were also exposed to the British band music. Later, Muttusvāmi Dīkshitar composed short songs called nōttusvarams based on the songs that the bands played. (There is a section on this elsewhere on this site.)

Later, a spiritual guru by the name of Chidambaranātha yogin took the young Muttusvāmi Dīkshitar to Kāshī (Vārānasī). The young Muttusvāmi spent several years there and learned various kinds of spiritual practices as well as hindūstāni (northern Indian classical) music.

Much of Dīkshitar’s life is shrouded in mystery. Most of what we know stems from legends that have grown around him. It is difficult to discern a history of his life.

One legend says that before his guru passed on, he told young Muttusvāmi to go the Gangā river and accept whatever he found in the water as a boon from the goddess. When the young disciple did so, he found a vīnā — a symbol associated with Sarasvatī, the goddess of learning and knowledge.  The vīnā in the image below is believed to be the one he found in the river Gangā.

After his guru passed on, Muttusvāmi Dīkshitar returned to Tiruvārūr.  On the way, he visited a Kumāra (Murugan / Subrahmanya) temple in Tiruttani. The map here shows you one modern route from Vārānasī. We don’t know which route Dīkshitar took, how he traveled, how long it took him to reach Tiruttani, etc.

Why mention Tiruttani and not any other place on his journey back to the south?

Time for one more legend! This one is particularly important in connection with his work from that moment onward.

Dīkshitar sat in silent meditation at the temple

Suddenly, he had a vision of an elderly man standing in front of him. He asked Dīkshitar to open his mouth and put a piece of sugar candy in it. Then, the man walked away into the sanctum sanctorum (“holy of the holies”; garbagrha, गर्भगृहः) and disappeared.

A recent view of the Kumāra temple in Tiruttani, Tamil Nadu. This is a very important place in Dīkshitar’s story. He is said to have composed his first song here, and adopted the signature guruguha for his songs. Source: https://tinyurl.com/2m9qn6kk [Accessed 27 May 2022]

This experience greatly moved Dīkshitar. He felt great joy, believing the elderly stranger to be none other the deity, Kumāra, himself. He felt blessed. It is believed that this moved him to spontaneously burst into a song … this happened to be his first composition. In this, he used the phrase guruguha — he took guha (one of the many names for Kumāra / Murugan / Subrahmanya) as his guru.

There are many more aspects to this story. I will try to add them in the comments box below later. You can read it if you are interested.

Subsequently, Dīkshitar returned to Tiruvārur and traveled to various places. He composed many songs related to several of the places he visited. He composed many of these songs relating to the shrines at the Tyāgarāja and Kamalāmbā temples in his own hometown, Tiruvārur. (In fact, the house where he is supposed to have lived is a very short walk from the temple complex. The structure is modern; there is no old house of his times there any more.)

He composed songs on a variety of deities. Many of his compositions contain geographical details of places associated with the deities of the songs. It is this fact that makes him a cultural geographer, although an unintentional one. These connections are what sparked the idea for this project.

His last long journey is believed to have been to Ettayapuram where his brother was living under the local king’s patronage.  It is believed that this was where he composed short, child-friendly songs that he based on the tunes he had heard in Manali as a young man. Elsewhere on this site you will see reference to this set of songs and links to their renditions.

Muttusvāmi Dīkshitar’s passing also is covered in legend. True or not, it’s a fascinating story.

The royal elephant went amok, ran to the grave yard and lay down there.

Fearing this to be a bad omen, the king sent for Muttusvāmi Dīkshitar who was, along with so many areas, an expert in astrology and spirituality. Hearing what had happened, Dīkshitar reassured the king that there was nothing to worry about. He then returned home and told his students to sing one of his own compositions, mīnākshi mé mudam déhi (“O, Mīnākshi, grant me love”) that he had composed on the beloved and popular deity of Madurai.

When his students came to the line mīnalōchani pāśamōchani kadamba.vana.vāsini (“O you who have eyes shaped like fish, you who liberates us from worldly bonds, you who reside in the kadamba forest”), he asked them to just keep singing that one line over and over. Then he sat in meditation and at some point, to the sound of his students singing that line, he is said to have passed on. The correct term we use in describing the death of people whom we revere as spiritual is “attained samādhi” (attained one-ness with the divine).

This legend is often told to say that Dīkshitar had the power to take on the ill-effects that were going to befall the king upon himself. In order to save the king (and his kingdom, perhaps), Dīkshitar is said to have given up his own life instead of letting the king die.

In 1976, the Government of India issued a postage stamp (25 paise) bearing an image of this amazing personality.

Resources you can read for further information

The text in blue, italics, and bold below draws your attention to geography concepts related to a particular item.