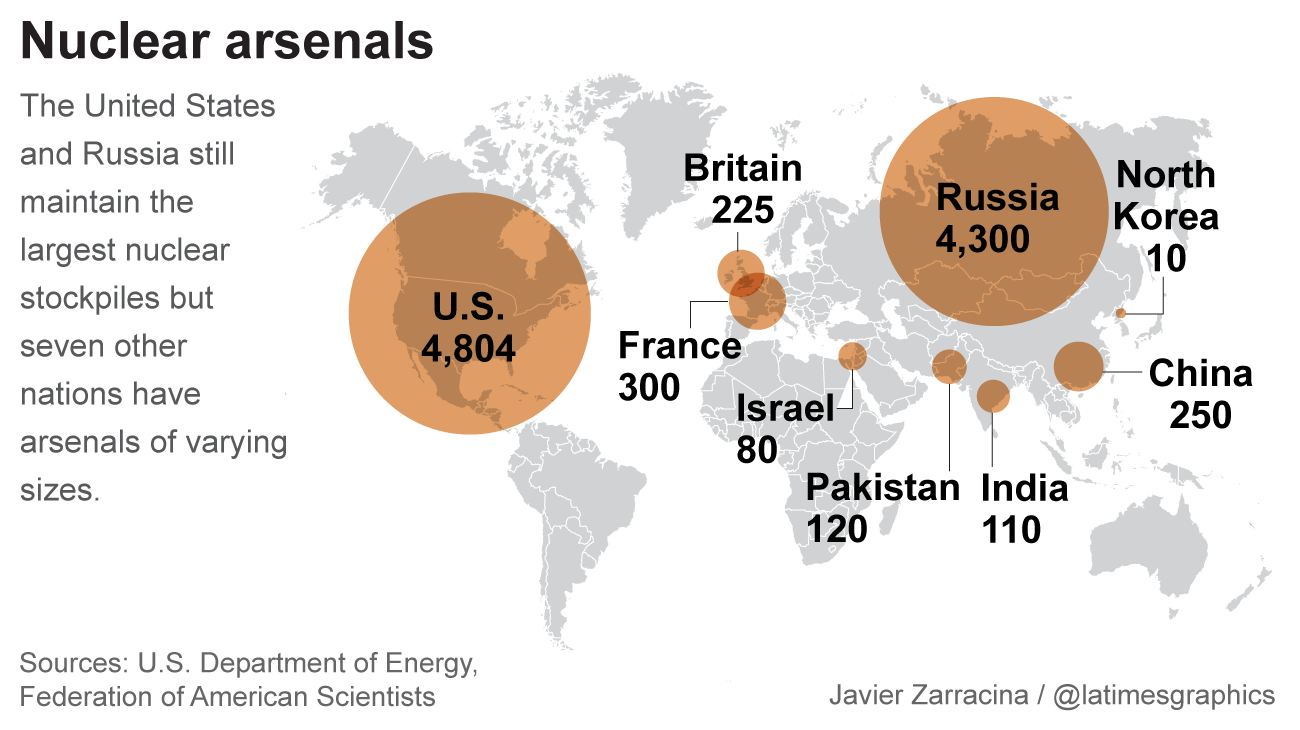 Today, a rather depressing interactive map and evidence of how stupid we humans are. We have spent so much time, money, resources, and energy to build weapons that we can drop on each other and wipe life out. The ‘visionaries’ who have guided these developments visualized a world that would be peaceful because we would never use these weapons. Why? Because if we do, they will, too. Madness.

For millennia, humans have envisioned a utopia (from the Greek ou = no, topos = place; thus an imaginary place!) where everything is dandy, peachy-kin, hunky-dory. Heaven on Earth.

The problem is my idea of a utopia is not the same as yours or someone else’s. When I envision a place that is perfect in every respect, I am deciding what is perfect there. You create your own based on your vision. So does everyone else. When we don’t (in fact, can’t) agree on which utopia is the best one, we have competing ideas of it. Then, what do we do? Well, fight about it, of course.

This fighting goes to the extent of being willing to wipe out your utopia because it is threatening mine! And I don’t have time for a long-drawn, slow war of ideas or even weapons with which to kill or destroy your utopia. No. What I will get, by any means necessary, is a weapon so deadly that I can launch it from my utopia on yours. BOOM! You and your utopia are instantly vaporized! Those of you who are not vaporized will end up with horrible lives. And if you have children, they will have all sorts of deformities and weaknesses.

Oh, the food that you eat … in fact, the entire food chain will become so polluted by my weapon that, for generations to come, you will suffer horribly.

Me? Oh, well, I will suffer too, yes. But at least I will have made you suffer!

This madness is rampant in the world today. And what is that weapon, I speak of? Nuclear bombs!

Nuclear bombs were first invented and built in the USA in the 1940s and first used by the USA on Hiroshima and Nagasaki in Japan. This is widely credited with bringing World War II to an end because the last fighters, the Japanese, were forced to surrender.

Hiroshima before the nuclear attack by the USA. (Source: Wikipedia; http://bit.ly/2igbh0R accessed on 22 Dec. 2016)

Hiroshima after the nuclear attack by the USA. (Source: Wikipedia; http://bit.ly/2igbh0R accessed on 22 Dec. 2016) Click on the image for larger view.

From the mid-to-late 1940s until about 1990, something called the Cold War raged on. International alliances were formed into the West and the Soviet Bloc. The main protagonists were the USA and the Soviet Union (USSR). The rest of the partners in each alliance were just that: allies. Any act of aggression against any member of one alliance would be treated as an act of aggression against the whole alliance. Other members would rush to the defence of the partner who was attacked.

To make sure that neither side had an advantage over the other, both sides aggressively built nuclear weapons. Dotted over the landscapes of both the USA and USSR were machines that could launch deadly nuclear weapons on each other in a matter of minutes. But neither side would use it, would they? Because both would be wiped out! This was called MAD (mutually assured destruction)! And it was – and IS – totally mad!

Scientists created scenarios (‘an imagined or projected sequence of events, especially any of several detailed plans or possibilities’ – dictionary.com) that tried to show what the landscape would look like after an all-out nuclear war. After all, they had learned something about this from the deployment in (on) Japan!

These scenarios evoked Earth as a greatly depressing, cold, violent, and bleak place. Such a places is called dystopia (again, from the Greek dys = bad, abnormal, difficult, topos = place). Several films were also made to imagine what this dystopia would look like after a massive nuclear war. All very depressing. Enough to make you want to stand up and shout, “ALL RIGHT! STOP IT!!”

Many people have been doing just that! In different ways.

Well, what does it matter to me? I live in rural WhatnotPura … just a small subsistence agricultural community, peaceful people, all getting along well with each other … yes! … a utopia!

Well, there is a matter of global winds. These winds can, and will, carry and deposit radioactive dust all over the world. You and I will be affected … to different degrees, depending on how far we are from the nearest explosion. Remember those ocean currents you studied in geography class? Think about how they could spread the poison around.

Most of these bombs explode in the air and shower their destruction down on us.

The power of the bomb is called yield and is measured in units called kilotons (kt). That is: the amount of energy released if a thousand tonnes of TNT (trinitrotoluene) were to be detonated. The one dropped on Hiroshima was 13-18 kt and the one Nagasaki was 20-22 kt. It was as if 13-18 or 20-22 thousand tonnes of TNT had exploded, respectively. Plus the long-lasting radioactive impacts.

Here is an interactive map (opens in a new tab/window) where you can locate the explosion of a nuclear bomb, give it all the parameters (yield, etc.). Then, it will show you how you will be affected. Depending on where you are – geography!

Check it out. Learn more about this madness of nuclear weapons and how you are personally affected by it.

No one escapes it!

Then, as a Citizen Geographer, explore what you can do to add your voice to rid the world of this MAD madness!

The Washington Post reports that the president-elect Donald J “Trump wants to ‘greatly’ expand nuclear capability, a radical break from U.S. foreign policy.  It has been the longstanding policy of Republican and Democratic presidents since Ronald Reagan to seek to reduce the number and the role of nuclear weapons.”