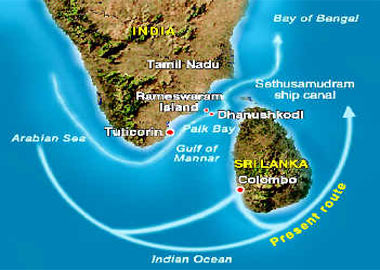 On 27 July 2015, Dr APJ Abdul Kalam passed away due to a heart attack. He lived a long life and won the admiration and adulation of millions of people. Known for his simplicity and accessibility, he became popular as the People’s President.

He was a great advocate of education not only in science but in the arts and humanities as well. Apart from that, he also lived an integrated life – he transcended social, religious, and many other boundaries that divide us. These are the things that endeared him to so many.

His birthplace – Rāmeśvaram, Tamil Nadu – is a very fascinating place, in addition to having produced such a person on its soil.

Rameśvaram is an island off the so-called Coramandel Coast. “Coramandel” is a corruption of the Tamil toponym (what’s a toponym?), சோழ மண்டலம் “chola mandalam” the region of the Cholas.

As an island, it has long been home to fisherfolk. You will recall from your study of economic geography that fishery is an example of primary activities. In this case, the livelihood is from marine fishery. You will also be able to quickly observe that in a complex social setup of any place, the kinds of economic activities are usually closely intertwined. Therefore, the making of boats, nets, and other articles needed for fishery constitute the secondary activities.

There have traditionally also been those who have offered services as their livelihood – renting out boats for the fishery and transport is one example of this. This being a service, we classify it as tertiary activity. The future People’s President was born of Sri Jainulabudeen, owner of a boat that ferried passengers (mainly pilgrims) between Rameśvaram and Dhanushkodi (submerged in a cyclone in 1964). The mother, Smt Ashiamma, was a home-maker (housewife).

Rameśvaram has long been a place of pilgrimage, a holy place. All holy places have a holy story (also called lore ; according to dictionary.com we get lore from “German Lehre teaching”).

It was here that Rāvana’s rebellious brother Vibhīshana approached Rāma and joined his army to fight Rāvana. It was also here that the army of monkeys (vānara senā) started to build the bridge for the army’s march on Lanka.

The great poet-sage Vālmīki, original author of the Rāmāyana, describes the building of this bridge in high poetic style. Is it possible that the land bridge between Rameśvaram and Lanka had previously existed, become submerged, and had again emerged and Vālmīki had used it in his epic poem?

The submerging of land under seas/oceans when the water level rises for water reason is not unusual. Two examples: the submergence of Dvārakā (off the coast of modern Gujarāt) and of Atlantis.

Perhaps that land bridge existed at the time when Vālmīki composed the Rāmāyana.

Subsequently, sea level changes, erosion, and strong cyclonic storm action seem to have submerged the “bridge” again. Thus there is stretch of shallow water where navigation of heavy vessels is not currently possible.

For some time now, there have been different proposals to dredge (dig up) that stretch so that the water be deeper and allow large vessels to pass.

Part of the sthala-puraana (place-lore; usually applied to holy places) of Rameśvaram is that Rāma worshipped Śiva here. There are many other such stories about this place. What is important to note is the resulting toponymy – Rāma (an incarnation of Vishnu) combines with Īśvara (Śiva).

Contrast this with the sthala-purāna of Kāshī. Śiva is the presiding deity at Kāshī. It is believed by many that if a person dies in Kāshī, at the moment of death, Śiva whispers the name of Rāma in their ear, thus giving them liberation (moksha).

Thus, the stories take two different forms, but the point being made is the importance of both Vishnu and Śiva. It is geographically interesting because these are real places where the stories are set.

To this day, many pilgrims who visit Kāshī bring water from the river Gangā and bathe the Śiva-linga at Rameśvaram. Pilgrims going from Rameśvaram to Kāshī, take some sand from Rameśvaram with them. Thus, in a very literal way, the geography of India is connected – north (Kāshī) and south (Rameśvaram).

The late Bhārata Ratna, Smt M S Subbulakshmi has rendered two lovely hymns (both are suprabhātams) — one on Viśvanātha in Kāshī and one on Rāmanātha in Rameśvaram (both links are to audio on YouTube). The late Samskrtam scholar and poet, Dr V Rāghavan composed the latter hymn. Both hymns describe a lot of the lore of both places.

Both were from Tamil Nādu, both transcended divisive boundaries, both loved Karnātaka music, and both had connections to Rāmeśvaram – the former by singing about the place, the latter by having been from there.

A version of this article appears in the Deccan Herald Student Edition, page 1, 30 July 2015.