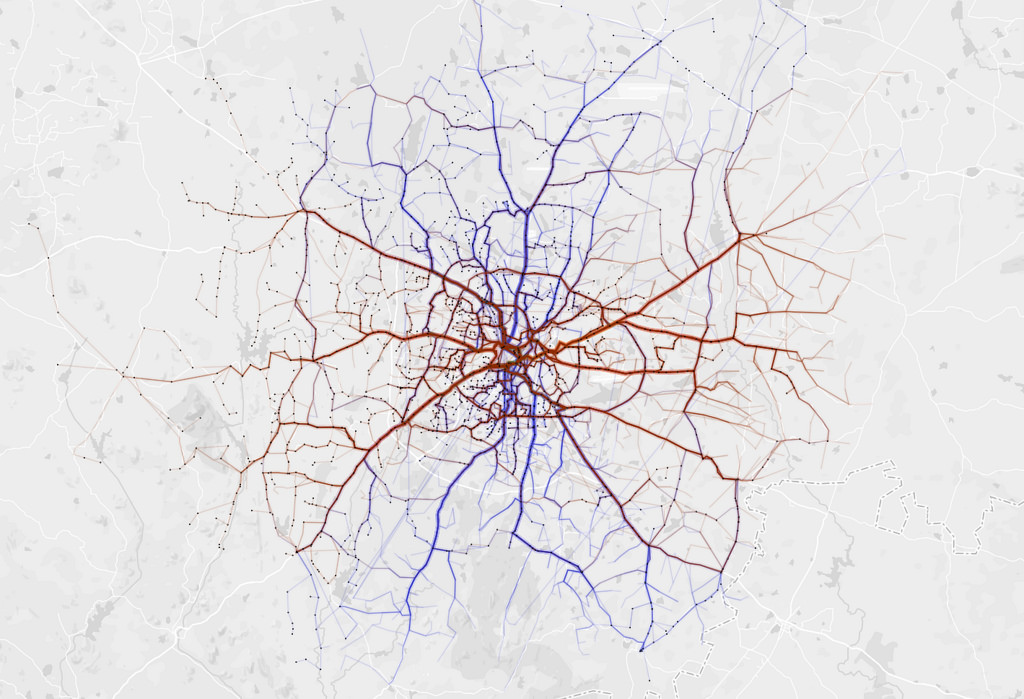 All places interact with other places – through the flow of certain resources (air and water, for example) and through the movement of human beings. This is called spatial interaction (spatial is the adjectival form of space).

Take a look at a recent project that mapped bus routes in Bengaluru. Data{Meet}, an open-source data community working to make data available to the public so that we can all be geographically better informed.

Yes! They are citizen geographers!

Check out their maps of the bus routes in Bengaluru.

The longest route map shows the longest route of the Bengaluru Metropolitan Transport Corporation (BMTC). “Route 600 is the longest, making a round-trip around the city, covering 117 km in about 5 hours. There are 5 trips a day, and these buses are packed throughout. It should be noted that while the

route traces the edges of the city in the west and north, it encircles the larger industrial clusters of the east and south.”

Based on a look at the map and the description excerpted above, explore:

Now look at the Reachability map. It beautifully illustrates two related geographical (spatial) concepts: core and periphery. In very simple terms, we can adapt this pair of concepts to show us areas where maximum human movement happens (core) and the areas where the human movement is least

(periphery). In the core, there is a great diversity of economic activities. Therefore, all transportation networks converge on the core. Just think of Majestic, the Kempegowda Bus Stand, and the City Central Railway Station. They are all very near to each other. Interstate, intrastate, local buses, metro trains, and Indian Railways – all are within walking distance from each other.

If you walk around – carefully, the roads are super dirty and there are literally many pit-falls! – and observe the kinds of economic activities in the area, …Wait! I am not going to tell you. I’ll only give you a hint (three actually): primary sector, secondary sector, and tertiary sector.

Little wonder then, when you look at the reachability map, you see all the bus routes converge on the core. Remember also, Majestic may be the main core, there are other cores too. Figure them out.

The differences between core and periphery are also visible in the Node strength map – ‘number of routes passing through a particular stop.’ What pattern do you observe as you go from the periphery to the core, in this map? Why do you think this pattern exists? (Some nodes are depots, so you would expect a large number of buses to converge there.) [Note: for some reason the interactive version of the node strength map does not display the symbols as seen in the image here.]

Data{Meet} are an organization of Citizen Geographers because they are helping us understand some aspects of the human geography of our city. They have also been working with the BMTC to help them understand the geography better and to improve services for the public.

Citizen geographers at work. Thank you!