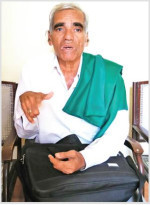 Eye-in-the-sky satellites, Google Earth, WhatsApp, latitudes, longitudes, agriculture, northern Karnataka, a 69-year old farmer, college students in a bus, a Chief Minister, and a foreign-educated Agriculture Minister. These are the interesting connections that happened recently. They open up some avenues for geographic exploration. And I get to share with you one of my new heroes – a geographer-farmer from Shirol village in Dharwad district.

During pre-budget meetings for Karnataka’s 2015-16 budget, Chief Minister (CM) Siddaramaiah held discussions to get agriculturists’ (farmers and others associated with the practice of agriculture) views on the agricultural component of his budget (he holds the Finance portfolio).

During the meeting, the usual comments were heard from various people … not enough investment, not enough support, etc. The exception was one agriculturist, Sri B M Hanasi, who owns seven acres in Shirol village, Navalgund taluk, Dharwad district.

He told the CM about the inefficiency and corruption of the way in which officials currently assess damage to crops (due to a variety of factors) and the subsequent compensation money that the government gives farmers to help them out. Sri Hanasi did not just have a complaint, he offered a solution: use internet technologies, particularly email, GoogleEarth, and WhatsApp. He even outlined the ways in which these could be used.

I do not know yet whether Sri Hanasi’s suggestions found a place in the CM’s state budget for 2015-16. However, the story illustrates some important points.

A curious mind is a live mind. Sri Hanasi has shown extraordinary curiosity about the world around him – and that includes today’s technologies. His creative thinking has made connections among his own profession, the general practice of agriculture in his area, the land use patterns, human interventions (in terms of agriculture, finance, law, etc.), and modern IT-based tools (email, Google Earth and WhatsApp).

To put in a nutshell: he shows that he thinks like a geographer ought to!

He learned about his professional issues from his own practice and that of his fellow-farmers. During bus journeys, he saw college students using their cell phones with great enthusiasm. He got curious and started talking to them about what they were doing on their phones.

The students shared their excitement with Sri Hanasi, explaining all that they were doing on GoogleEarth and WhatsApp. Over several such conversations, Sri Hanasi understood the power of these technologies because he could see the use for these in his own life to bring about beneficial change in the way agriculture is practised.

That, ultimately, is the key to developing passion for any subject we study – connecting it with our own lives in real ways. When we do this, we automatically start studying the discipline, not just the subject. This is especially true of geography.

Sri Hanasi’s creative thinking led him to discussions with the students and others to understand the applications of these technologies to his immediate local concerns. This is the fundamental level of the geographic concept of scale. His ideas, however, are applicable all over the state, country, perhaps anywhere in the world (three scales there). Google Earth and similar facilities online provide us access to geographic information over almost all the world (global scale) of which Shirol village is a part.

In doing this, Sri Hanasi described the conditions in his village and in his area. All these constitute what geographers call site features.

He also outlined a whole new way of connecting the various offices (located at various places in Karnataka) and the local farms (also places) – through email, WhatsApp, and Google Earth. This is an example of how he understands the concept of situation in geography. Situation is how places are connected to other places.

With his remarks to the CM, Sri Hanasi demonstrated the power of geographical thinking. And that thinking was possible for him because he has a curious mind; it is open to new ways of thinking, new ways of looking at issues and solutions to them.

If you ever doubted the power of geographical thinking and the geographical approach to understanding, analysing, and addressing real-world problems, here is your proof: Sri Hanasi.

I have had the pleasure of sharing Sri Hanasi’s geographical brilliance with you today.

He is my new geo-hero!

A version of this article appeared in the Deccan Herald, Student Edition, on 19 March 2015.