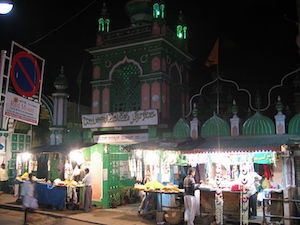 Religions and their geographies are fascinating to study. And to understand. The geographies of religions is an important part of cultural geography – the geography associated with cultures.

Humans have had religious systems for millennia. Religion is a way of trying to connect the human with something much larger; call it ‘universe’ or ‘God’ or ‘Spirit’ or any other name. This effort is a large part of human endeavor.

The geography of religions has many aspects to it. Today, a look at a few of them.

Religions have ‘folk’ origins. In a previous column, I have described the term ‘folk’ in geographical terms as something that is localized, confined to a small area. The more localized a religion (or an art form, for that matter) has very close ties with the local geography – the vegetation (importance of some plants for sacred rites; e.g.: tulasi, coconut, turmeric, tobacco), the fauna (some animals important to rituals: e.g.: elephants, cats, goats, sheep, horses), landforms (features of the landscape that are considered sacred: e.g.: mountains, hills, rivers, caves), seasons, and specific sites that are considered sacred (e.g.: sacred groves, buildings dedicated to worship, burial sites, sites of mythological importance).

People generally don’t remain isolated for long (yes, exceptions do exist). As human beings moved around and settlements interacted with each other, these folk religions became more and more widespread. As they spread, the fine details of the environmental connections may reduce a little while a larger set of symbols become more important.

Why? This happens because the environments to which a religion spreads will be considerably different from the original location of its origin.

As people move and ideas spread with them, the local religions adapt elements of the new ‘immigrant’ religion. Thus, both the pre-existing and the new religion will change in different ways.

In the Peruvian Andes, Catholic Christian practices are practised with ancient (pre-Christian) rites and festivals. In Haiti, Catholic Christianity and the local Voodooism co-exist. Here, in India, Christian, Hindu, Islamic, Bauddha, Jaina, and other religious practices not only co-exist, but often integrate elements from each other.

In some form or other, religions spread.

Nowadays, thanks to food preservation and transportation technologies, local geographical elements that were once part of more localized religious practices can now travel to distant parts of the world, to very different geographical conditions. Thus, the typically southern Indian coconut offered in (for example) Tirupati or Madurai are offered in Pittsburgh, Pennsylvania (Balaji temple) and Pearland, Texas (Meenaakshi temple). Since such offering is part of a larger set of rituals. Those rituals are performed in temples in different parts of the world.

Important festivals are often celebrated on specific dates in the lunar calendar; e.g.: Ramzan, Easter, deepaavali, Krshna jayanti. These dates vary from year to year on the solar calendar that is widely used now, the Gregorian calendar. Your school calendar is Gregorian. In India, schools (and offices and businesses) are closed for these holidays on whichever day they fall. They are also celebrated on those days.

However, in countries where religions following the lunar calendar are minority religions (e.g.: Hinduism and Islam in the USA and western Europe), people from these religions often compromise and celebrate on the nearest weekend. This way, the celebrations don’t clash with the work week when people are busy and can’t afford to take time off. I have participated in such celebrations on more convenient dates in the USA.

Different religions have different kinds of sacred architecture – the way their places of worship are constructed. You can easily see examples of this around you in India because we are a pluralistic country. You will notice that there are distinct patterns followed by churches, Hindu temples (of various sects), mosques, dargahs, sacred groves, village banyan tree shrines, etc.

Building such places is not always possible due to local conditions. For example, in many parts of the USA, there is not a large enough Hindu population or Muslim population to build a formal temple or mosque. There may be local regulations that may not allow such buildings. In these cases, old churches serve as places of worship for Hindus or Muslims. Outside, the building is a church. Inside, the worship may be specific to Hindu or Muslim religious practice.

In geography, we recognize that sacred (religious) and secular (non-religious) activities co-exist. After all, this division is purely a human idea, isn’t it? So, when you visit sacred places, you will also see many economic activities (these are secular) there. Everything from hotels, restaurants, and taxis to articles for ritual worship are available for money. This is one level at which religion and economic activities connect.

When religions spread, they encounter very different kinds of natural environments and the economic cycles that exist in the new places. For example, Islam has spread to southeast Asia. The origins of Islam are in the west Asian desert environment where the lifestyles, seasonal cycles, etc. are very different. In southeast Asia, we find a humid tropical climate with rainforest climate and a lot of subsistence agriculture.

Subsistence agriculture is agriculture practised on small plots of land, mainly to support the needs of the faming families. This kind of agriculture depends heavily on organic inputs (i.e., little or no artificial fertilizers, pesticides, or other chemicals) and manual labour (because the size of the farm land is too small, and the cropping patterns are polyculture).

Therefore, in those years when the dates of Ramzan fall during intense work on the land, it becomes difficult for farmers to practise fasting. Therefore, adaptation is required. (How do they adapt? Find out.)

Likewise, a person from a rural subsistence farming background in Tamil Nadu would have to adapt to the observance of Pongal in a metropolitan area within Tamil Nadu, more so in places outside of Tamil Nadu or even the country. In the USA, when I lived there, Pongal was not a big celebration. (Why do you think this could be?)