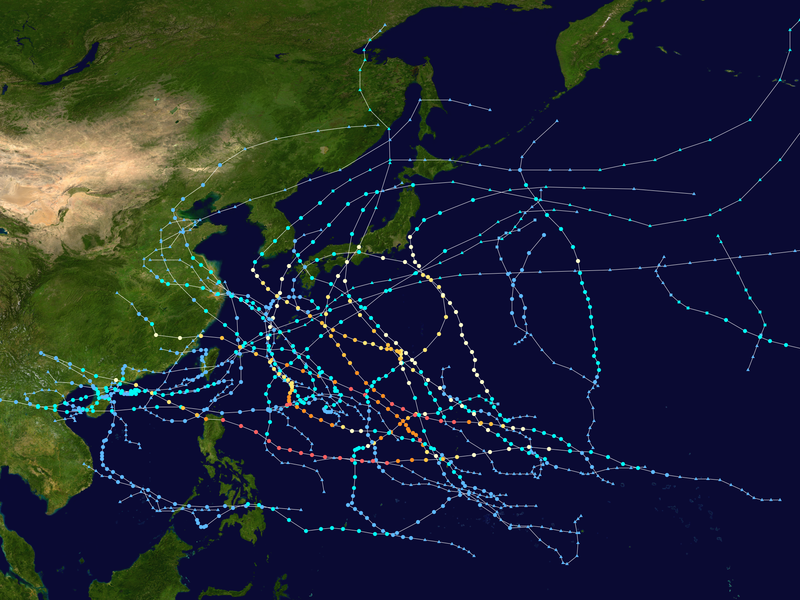 Chakravāta (चक्रवातः ) … cyclone … typhoon … hurricane. By any name, this high-energy wind event is a force of nature not to be taken lightly. Two such events are going on as I write this: Florence and Mangkhut.

Due to a variety of factors too detailed to get into here, low pressure zones develop over oceanic (or sea) waters in tropical areas. Air in the surrounding areas is at a higher pressure.

Air moves from higher pressure areas to lower pressure areas. This movement is what we call wind. Over the seas, the movement of the winds forms a swirl; it moves in a circular path. As this movement continues, it literally picks up water from the sea. That water comes down as rain. Lots of it!

If you are in the path of this swirling mass of wind and water, you had it! Things get very wet and very sticky in a very big hurry. It’s not just the amount of water being dropped, it’s also how much of it comes down in a short time i.e., the intensity of rainfall.

Meet Guruji Wiki Maharaj for a lot of information about these wind events.

Depending on where these swirling storms develop, they are variously called typhoon, cyclone, or hurricane. Those developing over the Atlantic ocean are called hurricanes. In our neighborhood in the Bay of Bengal (where these storms regularly occur) and in the Arabian Sea (less frequent), we call them cyclones. In Southeast and East Asia, they are called typhoons.

I found twenty different words for hurricane in the online Samskrtam dictionary. One that caught my attention was chakravāta (chakra = wheel, vāta = wind; cyclone). Samskrtam is a language full of synonyms. Therein lies a geographic fascination, but that’s for another time.

As I write this, hurricane Florence is wreaking havoc along the eastern-southeastern coast of the USA. Meteorologists started keeping an eye on a low-pressure area that developed along the western coast of Africa in late August 2018.

As of the time of writing, this is the information I found at the CBS news site.

The region has many hog (pig) farms. The pig poo is collected into huge ponds. Now the high-speed winds and the flooding, all that poo is being washed away into the water supply and the flood waters. This is a major health hazard.

Power supply is not available. This means stored food has been rotting and is inedible. Add to all this, the loss of property, livelihoods, school days, and the psychological trauma. All these should sound familiar to you since you will have seen the same issues in Kerala and Kodagu in the past several weeks, though the reasons for the flooding were different here.

Visit the National Hurricane Center website to learn a lot more about hurricanes in general, Florence in particular, and the other potential storms developing in the Atlantic.

In the middle of all this, someone decided to play a joke. They started this rumor (online, of course) that if you shoot at a hurricane you can weaken it and make it go away. Alas, many people did not see this as a joke. They actually shot at hurricanes. Again, various police and other authorities were at pains to tell people not to do this kind of stupid thing. They urged people to move away from the storm-prone areas! Check out here and here.

Meanwhile, typhoon Mangkhut has traveled over parts of the Philippines and has reached southeastern and southern China, leaving a trail of destruction. You can watch its incredible force in action in these videos.

What makes this typhoon (and others, too) particularly ‘destructive’ is that it has hit places that are very densely populated. And large numbers of the people affected (especially in the Philippines) are poor people. Their recovery from their losses will take a long time. In the meantime, other typhoons are likely show up.

Of course, we look the effects of these storms and immediately call this kind of phenomenon a natural disaster. Remember, these are high-energy events of nature. Nature has no disaster. We call it a disaster because we are hugely affected by it. A large part of this effect is a result of our own unwise activities on the land – deforestation, building where we shouldn’t build, building in wrong ways, etc. We may do these things because we have no choices (especially poor people), but the effects are more a result of human activity.

Can we ever live in a place where no violent events will ever occur?

A version of this article appeared in the Deccan Herald Student Edition, 19 September 2018