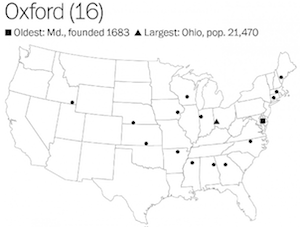 Bicycle sharing. Migration. Euro-toponymy in the USA. Map-reading. And other matters in today’s potpourri. Pay special attention to the italicized words – they are geography concepts you should explore.

The USA as we know it is largely a result of immigration from Western Europe in the early stages. In more recent times, the sources of migrants to the USA have been different and include Latin America (why is it called that?), Eastern Europe, and Asia. Africa was an early migrant source, but that was different (how so?).

Anything to do with culture will be reflected on the landscape. This is inevitable because we always “write” our stories on the landscape: ranging from the simple act of graffiti (“Sundaravaradarajan loves Parvathavardhini” on a rock or a tree trunk) to naming places (toponymy). This geographical writing gives us a picture of the history of places – historical geography.

The early large scale European migration to what eventually became the USA is a classic example. My guru Dr Surinder Bhardwaj used to give a holiday assignment to his undergraduate class on the Geography of North America. The students had to visit the grave-yards of their home towns and make a list of all the last names (surnames) and dates of the deceased (from year X to year Y) on the tombstones. This would show the sources of different immigrants – after all, all Europeans in USA are immigrants or their descendants. When you looked at these data, you could begin to understand why that town was named whatever it was. The history of the toponym of a place is always very interesting.

Here is a Washington Post story on English toponyms in the USA.  Find the names the author has given here on a map of the UK.

Now, try to find the history (or legend) behind toponyms in India. Here are a few suggestions to get you started: Mumbai, Darjeeling, Ajmer, Hyderabad, Bengaluru, Srirangapattana, Srirangam, and Madras / Chennai.

Continuing on the theme of migration … Europe has not only been the source of much migration to what the earlier explorers wrongly called the “New World”, it has also been the destination of migration from various other

parts of the world and countries within Europe as well. (Why did the early explorers call the lands that they “discovered” the “New World”? Why were they wrong?)i

Here are maps of foreign-born populations in Europe. Now, tell me (or anyone else who happens to be near you at the moment!):

And so on. You can explore the history of these patterns quite easily with a little extra reading. You could also try discussing these with your teachers and they may be able to help you, too.

Geography is all about places. This includes movement. Not just migration, but daily commutes as well. In recent years, we have been hearing a lot about green-house gases in the atmosphere and how human activity is contributing ever-increasing amounts of these. There have been many responses to this ongoing crisis and they are usually reduced to the three-point mantra: reduce, re-use, recycle.

One part of the ‘reduce’ is to use bicycles instead of motorized transportation. For this to be practically implemented, there have to be several things in place – safety for bicyclists (helmets, road rules to protect bicyclists, etc.), space (designated bicycle lanes on roads with markings to show where they are), parking facilities (bicycle racks), and facilities to share (exchange points). In India, this approach has not gained much strength – bicycling in Bengaluru is a nightmare! It is not that different in any other large Indian city.

However, in some cities of the West, they have been making quite considerable progress with encouraging and increasing bicycle riding as an alternative to motorized transportation.

Here is a very interesting story of three cities: New York City, Berlin, and London. It includes a video visualization of data collected by GPS (Global Positioning System) fitted to bicycles. Find out:

Now visit the project website upon which the above article is based – http://bit.ly/2aU6bzL – and answer these questions:

A version of this article appeared in the Deccan Herald Student Edition, 11 August 2016.