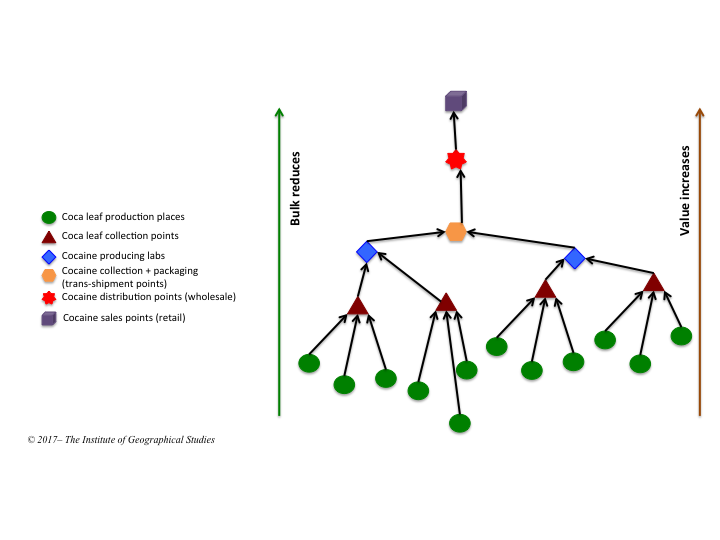 Coca to cocaine, we saw, was a process of bulk-reduction (large volume of coca leaves reduced to smaller volume of product) and value-addition (the cost of the product is higher than that of the raw material).

This value increases due to two broad kinds of factors:

It is the production costs that are more interesting. Creating a lab that can be well hidden from the law enforcement of a country requires a suitable location (here’s that fundamental geography concept!). In South America, the best locations are inside the thick Amazon jungles where it is difficult to find the labs except by those who know the area well.

The leaves have to be flown in to these labs. For this, there needs to be a landing strip for the small aircraft that bring the leaves. This means that the thick jungle growth has to be cleared out so that there is clear visibility for the aircraft to land and take off.  Here is a schematic representation of the geographic movement of cocaine. (To view a larger version of any image, click on it; it will open in a new tab/window)

The movement of cocaine shown as a schematic. (Image: The Institute of Geographical Studies, © 2017–)

Similarly other locations to which the product from different labs are brought have also need air strips.

The locations where the product from different labs are collected and packaged are trans-shipment points … products come in from different locations, undergo repackaging, and go out to different markets. (See the figure).

Governments have declared cocaine to be a dangerous drug and outlawed it. Making, possession, and use of cocaine is illegal and can attract severe punishments.

In some countries, the automatic penalty is death! In my travels, I have heard announcements in the aircraft as the plane has landed and is taxiing to the gate, “Possession of narcotic substances including marijuana, cocaine, and others is a punishable offence in this country. The punishment includes the death penalty.” I have heard this announcement upon landing in Singapore, Kuala Lumpur, and several West Asian countries.

Cocaine is officially illegal in most countries, if not all.

This results in pressure on the South American countries where production occurs. They are always required to find these labs and trans-shipment points for cocaine and destroy them. How to find these locations?

You can’t really go around crawling around in the thick jungle. So, governments use law enforcement aircraft (helicopters, small planes, coastal speedboats) and satellites to identify locations. From above these are relatively easy to spot because of the small clearings in the jungle and the tell-tale airstrips.

One of many “narco strips” (air strips used in cocaine trafficking). This one is in Bolivia. (Source: https://goo.gl/fQG82n) Accessed: Nov. 2017.

Often, the governments send in law enforcement officers who specialise in fighting drug manufacture and trafficking. These officers land there and often end up in gun fights with the people working at the labs. They confiscate and burn the labs, the coca leaves, and cocaine.

There is a huge demand for cocaine in many countries. But it is illegal. Therefore, manufacturing, packaging, distribution, and retail sale of cocaine is very deadly process.

This deadliness and the huge demand drive up the price of cocaine. More money involved leads to more competition to control the market. This competition leads to the formation of organized groups that specialize in trafficking cocaine. These are called drug cartels. A cartel is “an international syndicate, combine, or trust formed especially to regulate prices and output in some field of business.” (dictionary.com)

Competing cartels often end up in very deadly fights. This is the law and order problem that countries face.

Then there is the danger to the health of the users of cocaine. As I have mentioned earlier, the high numbers of cocaine users makes its use a public health issue. To combat this, different countries have taken different approaches.

Regardless of the approach taken, it is a geography issue because of where the users are concentrated, where they buy the cocaine, where the drug comes from, where its transportation routes are, etc.

In one interesting example, a geographer at my old department at Kent State University, Ohio, USA told me about a particular location in the city of Cleveland, Ohio.

There was a lot of cocaine sales going on in one particular corner. Everyone knew about this. That corner and the general area were very dangerous, as you can imagine. Police would patrol the area, but were not able to reduce the trafficking. They approached it purely from the point of law enforcement.

But the geographers interviewed people living in that area and found out that there was an abandoned building nearby where people would go to consume the drugs. They said that if that building were not there, the drug trafficking would reduce significantly.

From what I recall, they got the city to demolish this building and clear it out. The drug trafficking reduced dramatically.

The use of drugs has always been a part of cultures pretty much around the world. Over time, in some cultures they even became part of rituals. Modern drugs (and it’s not just cocaine) are far more potent and deadlier – especially synthetically manufactured drugs.

Many of these drugs have medicinal use in highly controlled and medically supervised conditions. Any other use leads to disaster.

Consumption of drugs may start as “just for fun” – also called “recreational use.” But the nature of the chemicals makes a user addicted to them very easily. That addiction then can spiral out of control and destroy an individual and their family.

Thus, the deadly geography of drugs such as cocaine can reach into the very depths of a person. Therefore, stay away from them! The costs of using drugs is far too high and not at all worth it.

There are many places in Bengaluru and elsewhere where people who are addicted to drugs (including alcohol, cocaine, etc.) are offered help to get out of that addiction.

It’s better not to get involved in drug use in the first place.

A version of this article appeared in the Deccan Herald Student Edition in December 2017.