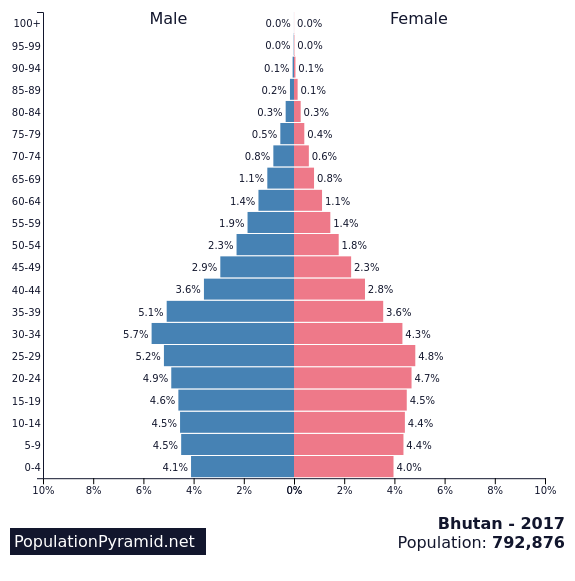 There was a time in India, when “May you have a house full of children” was a blessing. I used to mockingly bless my niece that way when she was in college (she used to make excellent cardamom tea for me). My mother used to chide me, “Don’t say such a thing even as a joke!”

My mother came from that generation where that was actually a blessing. As she aged, she saw and understood the need for smaller families. Her argument was entirely economic; you should be able to afford to give children a good life.

Population size changes over time. In very crude terms, we can think of the change as:

In some populations, the number of children born is much higher than in others. Why are these numbers higher or lower? A lot of it has to do with culture.

In countries where old-age social security is poor or absent, people wish to have children who can take care of the parents in old age. Also, if it is a culture where the daughter goes away to live with her in-laws, couples strive to have more male children. This is because male children take on the role of income generators for the family and since they stay with their parents, they can take care of the older generation.

Sadly, this has led to viewing daughters as burdens even in this day and age in vast areas of the country. It appears to be less so than it used to be, but these things don’t go away that easily.

When health care is poor, the chances of children surviving into adulthood and providing for the parents’ old age are reduced. So, by having more children, parents hope to increase the chances that more of their children will survive to care for them.

Over time, this becomes entrenched in the culture and results in beliefs that promote greater number of children being produced. It also leads to taboos against birth control and family planning.

In countries where health care is good, life expectancy is high, and incomes are high, family sizes tend to be much smaller. The high incomes bring other problems for a population – fewer children being born means the population becomes predominantly older people. If things don’t change, this will lead to a decline of the population size.

A population pyramid shows the number of males and females on the X axis and age groups on the Y axis.

The population pyramid for Pakistan shows a very large younger population. If a large enough part of this population survives the many challenges to life in that country, the size of the population will increase enormously. Those challenges include malnutrition, poor health care, economic and social disparities, lack of opportunities for economic advancement, unrest, strife, terrorism, etc.

Population pyramid for Pakistan. Click on the image for a larger version. (Source: http://ind.pn/2kzh03N)

On the other extreme, look at the pyramid for Japan (http://bit.ly/2kzOJdm ). There, the size of the younger population is small. This leads to fewer people reproducing. Not just because there are fewer younger people, even those that are there are not reproducing! They are under enormous stress to ‘succeed’ in life … job, job, job. So much work and hardly any time for R&R (rest and relaxation). The government is asking people to take time off and asking married couples to … have sex! Imagine that!

Population pyramid for Japan. Click on the image to view a larger version. (Source: http://ind.pn/2kyW6ld)

Japan’s situation is made even more complicated because they have very strict immigration policies. They don’t favor immigration as much some of the other ‘developed’ countries. Immigrating to Japan is extremely difficult.

So, for different reasons, the equation I gave you at the beginning of this article is playing out in different ways for Pakistan and Japan.

A version of this article appeared in the Deccan Herald Student Edition, October 2017