Geography … in the news – Coronavirus (Part 2) 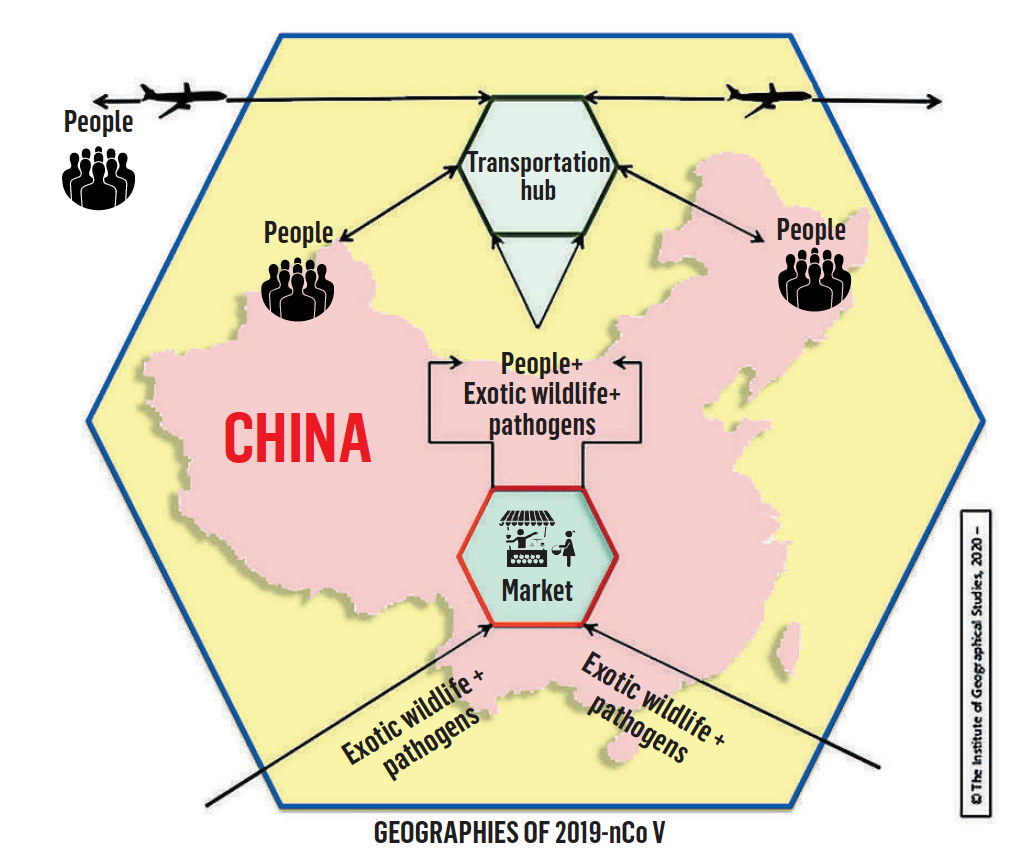 An unclean hub. Exotic species. Population concentrations and movement. Racism. Jingoism. Isolation. All connected by a pathogen. And, of course, geography.

Look at the diagram here. It is a schematic diagram, not a map. Basically, the exotic wildlife species are transported to markets. In this case a market in Wuhan, Hubei Province, China. By their nature markets are places of high human density where people come into contact with a variety of biological materials, including other humans.

The 2019-nCoV, the official name of this corona virus at this time, has been traced to the Huanan Seafood Wholesale Market in Wuhan. At this hub, zoonosis (transfer from one species to another; an animal species to humans in this case) helped the virus to move into the human population. From this hub, the virus has spread outward through human-to-human transmission. This is as much as we know so far.

Once it human-to-human spread happened, it was a matter of dense human populations in closed surroundings accelerating the spread. The railway station is one hub, with every station becoming a secondary hub. “Wuhan Railway Hub … is one of the four most important railway hubs in the People’s Republic of China. The 2013 ridership of Wuhan Railway Hub has reached 120 million trips, making it the hub with the largest passenger volume, surpassing Beijing and Guangzhou.” (Source, Accessed 3 Feb. 2020)

Jet travel has become increasingly affordable over the past several decades. This connects places of various sizes as never before. As the economy has become highly globalized, countries are interacting a lot more – i.e., spatial interaction is higher than ever before.

Thus, the virus has spread rapidly not only within China, but internationally as well.

Over time, countries around the world began to be very concerned about the virus reaching their cities and spreading. China began by a shutdown of several cities; people were prevented from traveling in and out of these places. The table gives you an idea of the size of the populations affected (Source, Accessed 3 Feb. 2020 ).

These give us a geographic understanding of where the virus is moving and when. This knowledge helps us explore how it is moving from place to place. This knowledge, in turn, helps us tackle the problem. Geography is a powerful and necessary tool in this effort.

Soon, countries wanted to airlift their own citizens who were in Wuhan and bring them back so that they could be safe from the virus attack. However, China was initially reluctant to admit that the problem was quite that serious (more on this in next week’s essay). Soon, the pressure on China to facilitate evacuation was quite strong and the government relented.

Once the evacuations occurred, the people arriving in their home countries were tested and quarantined to make sure that they were not infected by the virus. On 28 January 2020, the Deccan Herald (DH) reported that, “Over 250 to 300 Indian students are reportedly stuck in Wuhan triggering concerns over their well-being”, and that “In India, no case has been detected so far though nearly 450 people have been kept under observation in the country, most of them in Kerala, following screening for possible exposure to the novel coronavirus.” (Source, Accessed 3 Feb. 2020) As of 3 February 2020, Kerala had put 75 people in isolation wards (i.e., under quarantine) as a preventive measure (Source, Accessed 3 Feb. 2020)

On 31 January, DH reported, “Till Thursday, 21 travellers were under observation; 10 suspected patients are isolated at the Rajiv Gandhi Institute of Chest Diseases (RGICD) and 11 were quarantined at their own houses. Of the 13 samples sent for testing, four tested negative for [the 2019-nCoV]” (Source, Accessed 3 Feb. 2020 ) As of 3 February 2020, “Till date, 51 travellers from coronavirus affected countries have been identified and 46 are under isolation at their homes, 4 people have left the country and 1 person is admitted in isolation at a hospital.” DH also reported on 3 February 2020 that the Karnataka government has put “Kodagu, Mangaluru, Chamarajanagar and Mysuru districts … on high alert over the movement of people with suspected cases of [2019-nCoV].”

As of 2 February 2020, “58,658 passengers from 445 flights have been screened for nCoV symptom. A total of 142 symptomatic travellers picked up by the IDSP have been referred to the isolation facilities. As many as 130 samples have been tested of which 128 have been found to be negative so far. India has so far reported two positive cases of nCoV from Kerala.” (Source, Accessed 3 Feb. 2020)

Note: Links provided here have been verified as of 3 February 2020. The spread of 2019-nCoV is a developing story and information given here is likely to change over time.