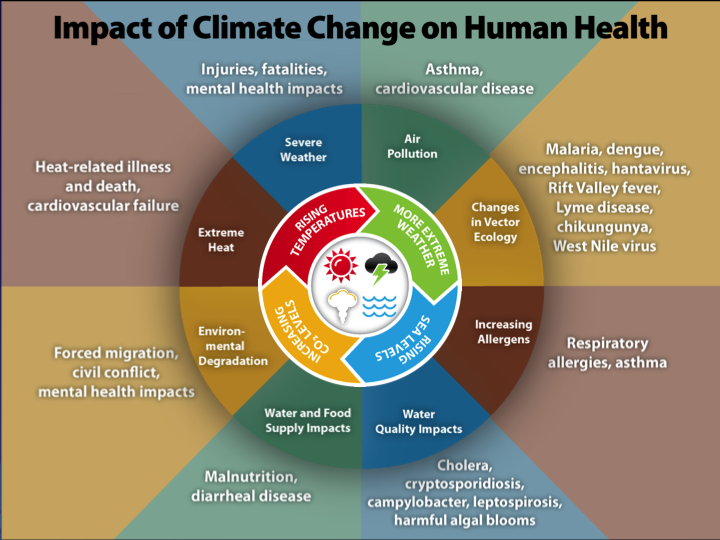 Human-caused, fast global warming is unhealthy not just for our planet but also for us personally. We have to adjust to new realities. We also have to take action to reduce or prevent some new realities.

As residents of the biosphere, we are intimately connected to the changes happening in at a larger scale. You may recall this diagram I had shared some time ago.

“Climate change impacts a wide-range of health outcomes. This slide illustrates the most significant climate change impacts (rising temperatures, more extreme weather, rising sea levels, and increasing carbon dioxide levels), their effect on exposures, and the subsequent health outcomes that can result from these changes in exposures.”
(Source: US Center for Disease Control and Prevention. http://bit.ly/2vddz4A)

Recently, I had also talked about how the whole Earth system is functioning because of transfer of heat from one place to another. It’s geographical heat transfer. As the various spheres mingle in complex ways, the ‘boundary lines’ in the figure are shown up for what they really are: merely a convenience for our understanding. In nature, there are no such boundaries.

By now you are probably already familiar with the term Anthropogenic Global Warming (AGW), i.e., human-caused (anthropogenic) rise in average global temperatures. The word average is very important. Those who deny that AGW is happening miss out on that word! When they have a cool day when the weather ought to be warm, they say, “Aha! What global warming, you nut case? If global temperatures are rising, how come we have cool days in warm season? Answer me that, Smarty Pants!” A similar argument is made when winter weather is particularly colder than usual.

In a word, the consequences are “unhealthy.” And that’s putting it mildly. Unhealthy for living things (yes, we may include ourselves in this category!) and for non-living things.

Increased coastal erosion, loss of the important ice caps, increasing frequency and severity of weather events such as storms, warmer temperatures in cooler areas, etc. are only a few of the impacts on the non-living components of Earth system.

These, in turn, lead to problems for life.

You can download an animated PowerPoint slide of the broad impacts of climate change on human health, published by the internationally reputed US Centre for Disease Control and Prevention.

In a recently published study, scientists have modeled the route that several species in North America will have to take in order to beat the rising temperatures that have already started occurring. In general, they will have to migrate northward (higher in latitude) in search of the best temperatures for their lives.

As this happens, habitats will change, because seasons will change. This means the diseases that spread in warm climates will have larger area (range) for them to spread. Mosquitos are a big part of this picture as this New York Times Magazine report and this Washington Post report suggest. Mosquitos are only one part of the story, though.

Very recently, three cases of the Zika virus infection were detected in Ahmedabad. None of the three people have any record of traveling to Zika-infested areas. This is raising many questions. (Read this: ‘How did the Zika virus get to India? Or has it always been there?’ Read this series of stories on the topic.)

What can we do to minimize these impacts? Can we have global action? Well, the US president, Donald Trump, refuses to meet the commitments of the Paris climate accord (while India and China have been making remarkable progress in shifting to solar energy). The USA is a major contributor to global green-house gases. Most other countries have at least signed the Paris accord.

Can we have local action? This, we can probably do. You know the usual mantra reduce, recycle, re-use and so on.

Which one is more important – local or global? What is your answer and why is that your answer? Share your thoughts on the The Institute of Geographical Studies website (http://tigs.in) on the blog version of this article.

Featured image, courtesy: US Center for Disease Control and Prevention.