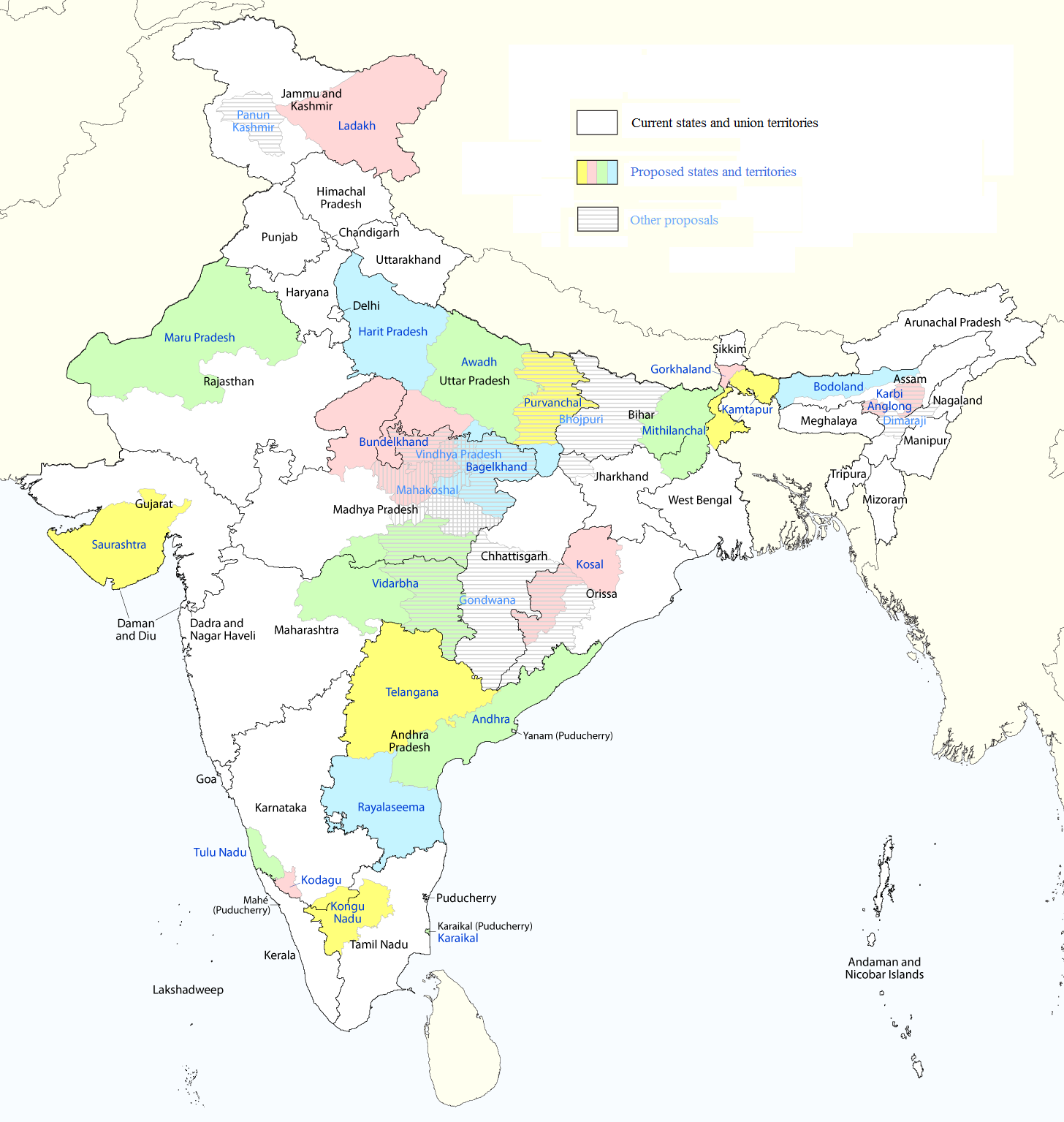 States, even countries, often break up into smaller units. There are many demands for smaller states in India. Here are some geography points about this phenomenon.

You may have seen these (and similar) headlines recently: “Mayawati demands for splitting UP in 4 parts”, “Telangana decision revives old statehood demands”, “Train services hit, violence continues in Assam”, and so on.

Within countries, diverse populations often want their own regions so that they can have ‘fairer’ governance than they have when they share the land with other groups. Borrowing a concept from biology, geographers call these ‘fissiparous forces’ (fissiparous – producing offspring by fission).  These ‘forces’ that disunite a region are also called, now borrowing from physics, ‘centrifugal forces’ (from the Latin centri – centre, fugus – fleeing from; going away from the centre, dis-uniting).

Historically, many regions have had to deal with such forces and have broken up into smaller pieces. One of the largest examples in recent times was the break-up of the Union of Soviet Socialist Republics (USSR) into all its pieces. During the era of centralized, authoritarian, communist rule, the centrifugal forces in the USSR were suppressed ruthlessly and by re-arranging human geography in such a way that there were not enough number of people in any one republic to start a separatist movement. Look at the maps of different republics and ethnicities of the USSR and you will get an idea of the situation.

Once General Secretary Mikhail Gorbachev initiated reforms that allowed a degree of democratic expression, the USSR rapidly disintegrated because the individual republics declared themselves independent.

Independent India’s human and political geography was shaped by the linguistic organization of its states – states were demarcated based on majority languages. Considering the diversity of our population, perhaps this was all that could be used to divide states at that time. However, people have always had other things with which they identify themselves – ethnicity, caste, race, language, etc.

Over time, the states of India got ‘re-organized’ in different ways. The latest were Chhatisgarh, Jharkhand, and Uttarakhand. Now, Telengana is underway.  Look at the map and you will see that there are many movements seeking separate territories (states).

The issues are very emotional and people have killed, gotten killed, and even committed suicide for the cause they believe in. The parents of one young man who immolated himself in support of the demand for Telengana have recently said that his dream has come true and that his soul has found peace; essentially, that he did not die in vain.

Perhaps equally or even more important are issues of resources and access to them. The arguments from regions-that-want-to-break-away are essentially something like this: “We have a lot of resources (agricultural, mineral, water, etc.) and we produce a lot of wealth for the state in which we are now. However, our region does not get a fair share of the state’s investment. Therefore, we are being exploited for the benefit of other regions. Give us our own state. We will govern it ourselves and the Central Government will have to invest in our state so we can achieve higher levels of development.”

In these movements, language, ethnic identity, etc. are symptoms of very hard-core geographic issues – what resources exist, where do they exist, and who benefits from them. Here are brief outlines of the various separatist movements.

Thus, the re-organization of the political boundaries inside India is ultimately about money and power that stem from gifts of geography. But geography also poses challenges for both the new and the ‘old’ parts of the states after re-organization.

“What are some of the benefits and challenges in these cases?”, is a good geography question. Here is an interesting analysis of the political dynamics and the votes numbers. Here is an example of one effect of the decision to create Telegana.

Here is a report on how many states we would have if all current separatist demands are met.

(A version of this post was published in Deccan Herald Student Edition, 5 August 2013, page 1.)