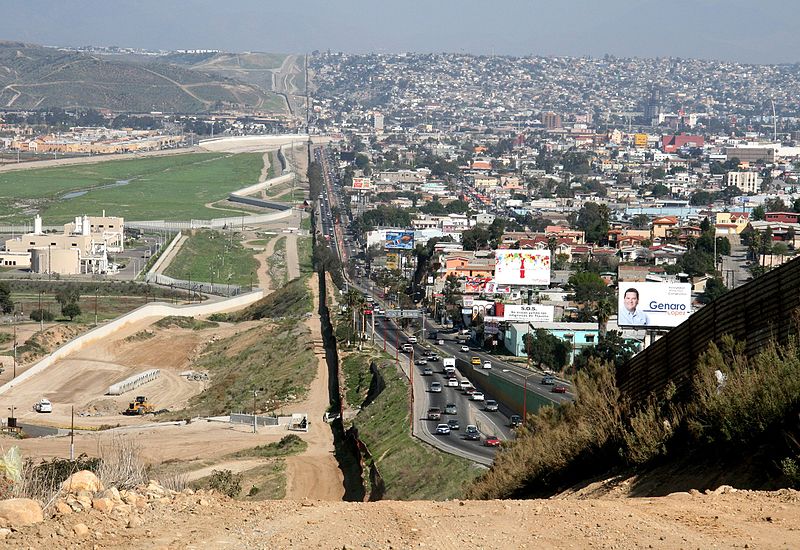 The border between the USA and Mexico is very much in the news in North America these days. The US House of Representatives, the US Senate, the president, and the public are not in agreement on the issues surrounding it. All this is, of course, related to geography!

Human migration is an ancient phenomenon. Perhaps now the worldwide migrations are the biggest in numbers. You can do some research online and find out if this is so.

Geographers have long studied migration. Why? Place plays a central role in this phenomenon, and geography is about places and connections among them.

There are two basic factors that drive migration: push factors, and pull factors. These factors are complementary (note the spelling) – each push factor is matched by a corresponding pull factor.

Migration occurs along particular routes. If you can visualize each route as a line (a trace) you can readily see that it has three kinds of points along it: (a) origin or source, (b) intermediary, and (c) destination. Each point is a place. Each of these places has different characteristics. The relationships that migrants (those who migrate) have with the different kinds of places along the route also vary.

Now, a very brief look into the current debate about some of the issues about immigration into the USA.

For over two centuries, the USA has been a very popular destination for people seeking to migrate in search of better opportunities and fleeing (or just leaving) unfavorable conditions in their original countries. This immigration has occurred in waves … the western Europeans, Asians, Central Americans (particularly Mexicans), etc. The USA, as it currently is, is known as a ‘country of immigrants’.

Reasons for people immigrating to the USA have varied from time to time and region to region. They are mix of some set of these:

Push factors – political violence, threat to life, war, economic problems, violation of human rights, desire for ‘opportunities for a better life’, and so on.

Pull factors – the belief that the USA is a ‘land of opportunity’ where a person can rebuild a safe and reasonably prosperous life, where anyone can achieve economic and social success if they ‘work hard and follow the rules.’

As with all immigration, the pull factors are not always as simple as they may appear. Therefore, not everyone may realize their dreams.

Get your atlas out. Find the countries that constitute Central America. Several of these countries are in great political turmoil –

These factors are pushing people to emigrate from their countries.

To the left lies San Diego, California and on the right is Tijuana, Baja California. The building in the foreground on the San Diego side is a sewage treatment plant built to clean the Tijuana River.
[Source: https://goo.gl/jw3z2t Accessed : 26 Feb. 2019]

Which way can they migrate? Over land, they can migrate northward or southward. They choose to move northward to the USA. Why is this?

Around the world, many people believe that the USA is the paradise on Earth where there are plenty of opportunities and that they can make better lives for themselves. This perception is often fueled by images they receive in the media and information flowing back from earlier immigrants. Also, the conditions in their own countries are so dire that they are willing to bet on being able to create a better life for themselves in the USA.

Thus, large groups of people – caravans – are heading to the north, to the USA.

This set of circumstances creates a directional bias – a preference for a particular direction to move in.

These migrants from Central America are very poor and cannot afford even basic transportation, forget flights and ships. So they are walking thousands of kilometres to the US-Mexico border in the hopes of getting asylum in the USA.

The journey takes them through several intermediate countries where also they have to be prepared to face dangers – unwelcoming locals, fatigue, exposure to the weather, lack of shelter, and so on. However, they have also found locals in many places helping them out in many ways … giving them food, water, shelter, etc.

However, when they reach the US-Mexico border, they are either held by the US immigration authorities or turned back – no entry, go back.

The USA is now facing a huge debate. One side says that these are people fleeing dangerous conditions and the USA must offer them a second chance in life, because that is what the USA is all about. The other side says the asylum seekers are dangerous (criminals) and will also take away American jobs.

The president of the USA leads the second group. The opposition Democratic Party now controls the US House of Representatives. The Democrats believe that the USA should process the asylum applications properly and grant asylum to them.

The president is adamant that the convoys are a grave threat to the USA’s national security. He has been fighting with the US House of Representatives (that the opposition Democrats now control) asking for many billions of dollars to build a “beautiful” wall covering the entire US-Mexican border. The opposition says “no” to this demand.

This border is a strange beast! It is not continuous, it is not the same kind throughout. In some places it is a concrete wall, in some places it is a fence, there is razer-wire (this is deadly and cannot be crossed), and in other places the Rio Grande (Spanish name meaning “The Big River”) is a ‘natural’ barrier.

Check out this very interesting fly-over view of the border.