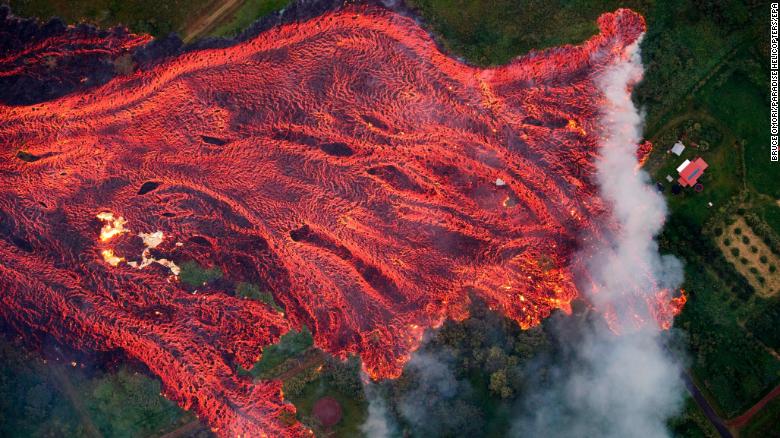 Welcome back to the new academic year. I hope you get to learn all manner of interesting things that make you feel awe and wonder at this beautiful world we live in. I also hope that you will develop a sense of your power to heal the many wounds that we have inflicted on it.

I look forward to sharing my love of geography with you in this weekly column. I love how geography helps me look at the web of connections that are at work every moment in this world.

Come with me on this journey and you will likely find that geography is not only vast, but also vastly fascinating. Let’s go beyond the textbooks and exams and explore a world of ideas!

In late May 2018, i.e., a few weeks before I write this, Mr Darryl Clinton was on his balcony. He had tried to put out a fire on his house earlier.

Nearby, the goddess of the ancient culture of the land, Pele (pronounced PAY-lay) was very actively spewing fire. Coming out along with the fire were massive quantities of “Pele’s hair” with “Pele’s tears” at the end of each.

Breathe it in, and you could die!

Then, Pele spat out a large, very heavy, and fiery piece of rock and it hit Mr Clinton on his shin. His leg was shattered. He is now recovering in a hospital and said he “just wanted to live.”

Well, in your geography class you may have studied about volcanoes and how they work. How they are formed is extremely interesting. Among the different ways in which a volcano is formed, is by the formation of hot spots.

Hot spots occur away from tectonic plate boundaries. The hardened crust of the lithosphere (litho = rock; sphere = … well, sphere!) is not uniformly thick. There are places where it is less and places where it is more. Where it is not thick, and where it is weak, the mantle’s heat keeps heating and pushing up against the crust. Eventually, the rock in that part of the crust melts, weakening the crust.

The land forms a bulge, rather like a pimple. Eventually, the magma bursts out from the bulge, and hey! There is a volcano!

A series of such hot spots developed in the Pacific Ocean, stretching from 18° 55′ N to 28° 27′ N latitudes to 154° 48′ W to 178° 22′ W longitudes. These bulges form the Hawai’i (pronounced hawaa-ee-ee) archipelago of about 130 islands of various descriptions depending on how you count them (see Hawai’i Center for Volcanology). Together they constitute the 50th state (called Hawai’i) of the USA as of 21 August 1959.

Mt Kilauea (pronounced keela-WAY-a) is a shield volcano on the main or Big Island of Hawai’i. Kilauea means “spewing” or “much spreading” – a very apt name.

Helicopter overflight of Kīlauea Volcano’s lower East Rift zone on May 19, 2018, around 8:18 AM, HST. ‘A‘ā lava flows emerging from the elongated fissure 16-20 form channels. The flow direction in this picture is from upper center to the lower left. Source: https://goo.gl/Ns6GtH [Last accessed 11 Aug 2018] Click on the image to view a larger version.

It has been doing a lot of both since 3 Jan 1983. I remember watching the nightly news on national television at the time in the USA, where I lived. It was amazing to watch it live on TV.

From 3 May 2018 there was a magnitude 5.8 earthquake that seems to have cracked open the crust allowing magma to come out (at which point it is called lava) at a spot in an area called Puna.

The next day, 4 May 2018, another earthquake (magnitude 6.9) increased the outflow of lava.

Since then, there have been a series of eruptions. Lava has been spewing out and flowing like a red river downslope. Everything in its way has been burned up and covered with new rock made of the cooling lava.

As I write this [3 June 2018], evacuations are continuing. A few days ago, the government announced that those who don’t vacate their places despite the evacuation order will be arrested!

A search on YouTube for Kilauea will give you links to many videos that you can check out. This is one of my favorites.

Until next time, then, Aloha!

I said this is an ‘island’ greeting. It is specific to the Hawai’i islands.

An earlier version of this article appeared in the Deccan Herald Student Edition.